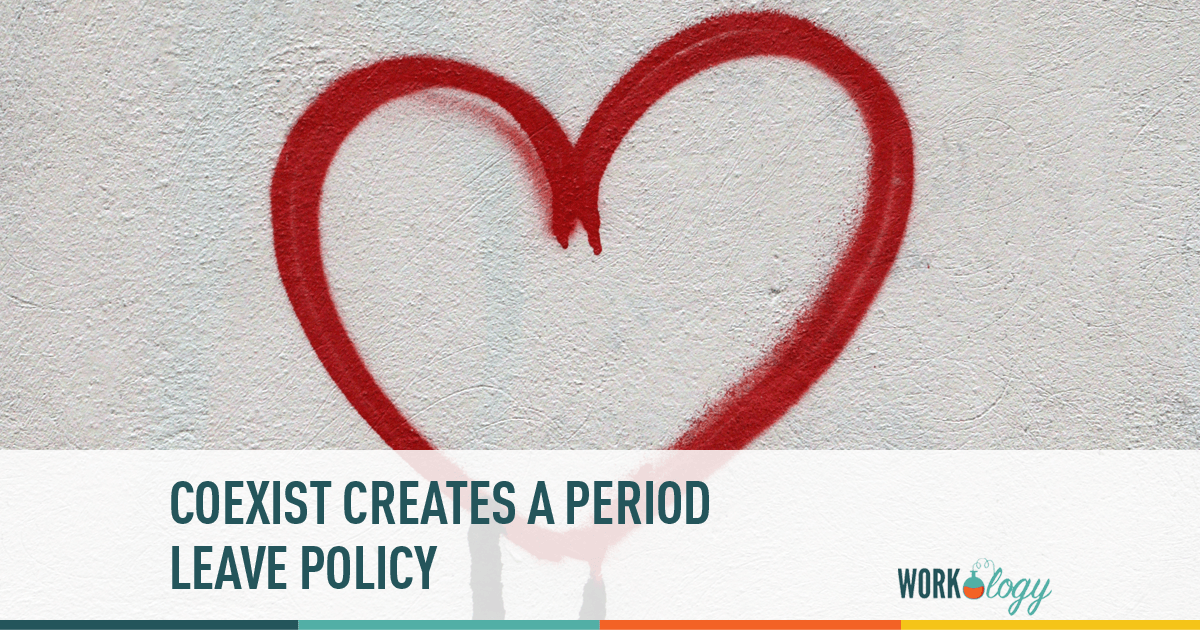 Coexist, a British company with a 77% female workforce has created a “period policy” to allow employees to take time off during their periods without having to pretend they’re “sick” or face the stigma that lingers around menstruation.

Bex Baxter, director of Coexist, told The Guardian that the policy was specifically designed to combat that stigma:

“I have managed many female members of staff over the years and I have seen women at work who are bent over double because of the pain caused by their periods. Despite this, they feel they cannot go home because they do not class themselves as unwell.

“And this is unfair. At Coexist we are very understanding. If someone is in pain – no matter what kind – they are encouraged to go home. But, for us, we wanted a policy in place which recognises and allows women to take time for their body’s natural cycle without putting this under the label of illness.”

More than just another leave policy, Coexist’s period policy encourages women to take time off as needed and discourages reluctance to speak openly about their bodies. It’s specifically designed to reshape the workplace conversation about bodies; to force us to acknowledge that we aren’t just thinking machines, we’re biological machines with complex processes and cycles. Part of the logic of Coexist’s policy is that productivity is affected by everything going on in your body, not just how many super foods you had for breakfast or how many hours of sleep you got last night. According to Baxter, research shows that womens’ productivity ebbs and flows in relation to their menstrual cycle – so workplaces should work with that natural flow, rather than against it.

In addition to creating a workplace that’s more understanding of the body’s “natural cycles, Baxter wants to reduce stigma and end the perception of menstruation as illness. Sure you could use your sick leave to take a day off as needed, but should you have to take a sick day when you’re not sick? Menstruation isn’t a state of illness or aberrance – it’s an ordinary biological process. And one that we aren’t particularly accommodating about. Like many products designed for women, consumers of menstrual hygiene and pain relief products are hit with a heavy pink tax. Having to use up your often limited sick days because of period pain or nausea is frustrating – is it just another form of pink tax?

While I’ve worked in majority female office environments, I’ve never worked for a company with a flex time or leave program specifically designed with menstruation in mind. Coexist is the first and only company to offer such a program. I would be shocked here, that no one else has created such a policy in 2016, if our society weren’t so deeply averse to talking frankly about menstruation. I’ve had male friends and colleagues who couldn’t be phased by such talk, but I’ve also known men who can barely walk down that aisle of the drugstore. The number of sexist stereotypes that persist – “they’re all crazy when they’re on the rag,” “I don’t trust anything that bleeds for a week but doesn’t die” – make frank discussion uncertain ground. There’s a basic reluctance too to talk about your body in much detail in a work environment. How much do your coworkers really need to know about you?

It’s rare for people to talk about their period at work without euphemisms, or for them to go into any detail about them. Not just because of sexist stereotypes about menstruation – I bet you’ve worked with women who have no sympathy for whatever symptoms you experience – but also because of the norm of work devotion, wherein being too human at work can be perceived as a sign of weakness or lack of drive. You’re letting your period get in the way of your performance? Ridiculous! But just as the norm of work devotion is being eroded by the changing dynamics of remote and flexible teams and employees fighting for more work life balance, so too are some of the old sexist stereotypes about women at work being chipped away as more and more women enter senior roles. But that change hasn’t been swift or smooth or a steady incline.

Coexist’s period policy, if adapted to other organizations with different company cultures, may be the first step in normalizing menstruation, or it may backfire like those unlimited vacation policies. For now, it’s an interesting idea, but it’s too soon to tell how it will turn out.