List of Cities and States with Paid Leave Ordinances. Will Austin Be Next? Now that I’m a resident of Austin, I’d like to talk about a proposed paid sick leave ordinance that is up for a vote by the Austin City Council on February 15, 2018. The proposed ordinance mandating all private employers to pay sick leave would be a first for Texas. The ordinance requires that employers allow employees to earn one hour of sick time per 30 hours worked, capped at 64 hours, or face a $500 penalty per violation.

As a tech hub, Austin businesses are already recruiting in a highly competitive market. The ordinance will likely push employers to boost benefit packages in order to attract top talent, but also remove the employers’ ability to customize what it offers in order to fall in line with the paid sick leave mandate. However, the ordinance would not usurp current sick policies in place at private employers who provide eight or more days of sick leave or paid time off. In June of 2020, the high court let stand a lower court’s ruling that Austin’s paid sick leave ordinance is unconstitutional because it conflicts with the Texas Minimum Wage Act.

Forcing one benefit over others isn’t necessarily good for Austin’s workforce or Austin’s economy. While tech companies are most concerned about losing the ability to customize benefits, the ordinance would have the greatest effect on the maintenance, construction and service industries, that last group including restaurant staff and caretakers. Between 65 and 70 percent of employees in those sectors do not have access to sick leave, according to data from Work Strong Austin, a coalition of activist groups supporting the ordinance.

Last year, the Austin Independent Business Alliance surveyed more than 100 employers and found that a large majority were against the city regulating sick pay. Of the surveyed businesses that do not provide sick leave, 70 percent cited costs as the reason. This could mean a huge impact on overhead cost for employers, potentially forcing them to cut costs in other areas (like salaries or perks). 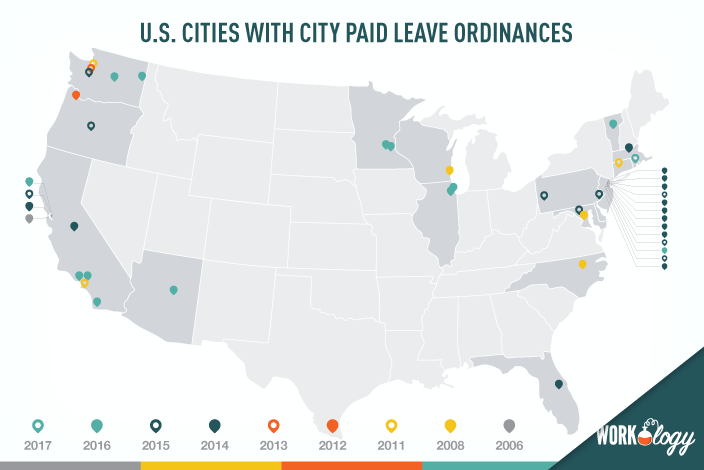 I took a look at several cities that have specific paid leave ordinances and how they are structured. At the minimum, these policies cut down on the number of employees that come to work sick and infect others. Some of them even specifically include domestic violence and stalking.

Under Seattle’s Paid Sick and Safe Time ordinance, all employees working in Seattle accrue paid leave that can be used for absences due to the care of a personal or family member’s health condition or critical safety reason. On September 1, 2012, the initial ordinance went into effect for all employers with more than four full-time equivalents. In December 2017, the ordinance was amended to significantly expand employer coverage and employee rights.

Beginning July 1, 2017, workers in Minneapolis accrue one hour of sick and safe time for every 30 hours worked, thanks to the city’s Sick and Safe Time ordinance. Workers will accrue up to 48 hours per year, the unused portion of which can carry over to the following year, but after that, that accrual balance in following years cannot exceed 80 hours – and that includes salaried employees or other “exempt” workers.

The San Francisco Paid Sick Leave Ordinance became effective on February 5, 2007.  All employers must provide paid sick leave to each employee (including temporary and part-time employees) who performs work in San Francisco.

In June 2017, the Chicago City Council unanimously approved a new paid sick leave ordinance that requires every employer in the city to provide at least some paid time off to employees for sick leave purposes. The ordinance is effective as of July 1, 2017 and covers any employee who works within Chicago’s city limits and works 80 or more hours within a 120-day period. Employers must provide workers the right to accrue and use up to 5 paid sick days (or 40 hours) per year, earned at a minimum rate of one hour for every 40 hours worked. Workers must be allowed to roll over up to 20 hours of unused sick leave into the subsequent year.

In November 2014, Oakland voters overwhelmingly passed Measure FF, an amendment to the Oakland Municipal Code establishing a minimum wage, requiring payment for accrued sick leave and requiring payment of service charges to hospitality workers. The measure establishes a minimum wage in the City of Oakland of $12.25 per hour, beginning on March 2, 2015. The measure also requires that employers in Oakland provide paid sick leave to their employees beginning on March 2, 2015, and requires that hospitality employers who collect service charges from customers pay all service charges to their hospitality workers.

On June 2, 2016, Los Angeles Mayor Eric Garcetti signed into law Ordinance Nos. 184319 and 184320, which create enhanced paid sick leave rights for employees working within the City of Los Angeles. Beginning on July 1, 2016, employers covered by both the California Healthy Workplaces, Healthy Families Act of 2014 and the Ordinances will need to comply with the more generous provisions of the Ordinances. As a result, employees working in the City of Los Angeles will be entitled to up to 48 hours of paid sick leave per year, nearly twice the amount as most of their non-Angelino counterparts.

The City of San Diego’s Earned Sick Leave and Minimum Wage Ordinance, San Diego Municipal Code (SDMC) Chapter 3, Article 9, Division 1 became effective on July 11, 2016. It is applicable to employees who perform at least two (2) hours of work in one or more calendar weeks of the year within the geographic boundaries of San Diego. Employers must provide each employee earned sick leave.  Employees must accrue no less than one (1) hour of earned sick leave for every thirty (30) hours worked within the geographic boundaries of the City; employers may cap the total accrual of sick leave at eighty (80) hours.  Any unused accrued earned sick leave must be carried forward to the following benefit year.

The Tacoma Paid Leave Act took effect February 1, 2016. Employees started earning sick leave. Employees earn 1 hour of sick leave for every 40 hours worked. Employees are able to earn up to a minimum of 24 hours of paid leave each year. Employers can cap leave usage at 24 hours a year. Calendar Year is defined in the ordinance as a calendar year, a 12 month period starting on the date of the employee’s hire date or a fiscal year.

New Brunswick’s paid leave ordinance is particularly interesting, as it focuses on domestic abuse and violence:

As you can see city specific paid leave programs continue to grow in popularity, and I think given the continued growth in Austin combined with the growing employment divide tech versus service in Austin, a mandated paid leave program just might be the right step for all Austin residents. Many business owners are concerned because of the swift move by the city to move forward with the vote leaving employers with many questions and concerns about how quickly the ordinance if passed will be put into effect.

A growing number of states in the United States and cities, I might add require employers to offer paid time off. The requirements for each state are different, however, I see more of this trend continuing with states like California, Connecticut, and New York leading the way. Currently, 11 states and Washington, D.C. as well as over 30 localities require paid sick leave.