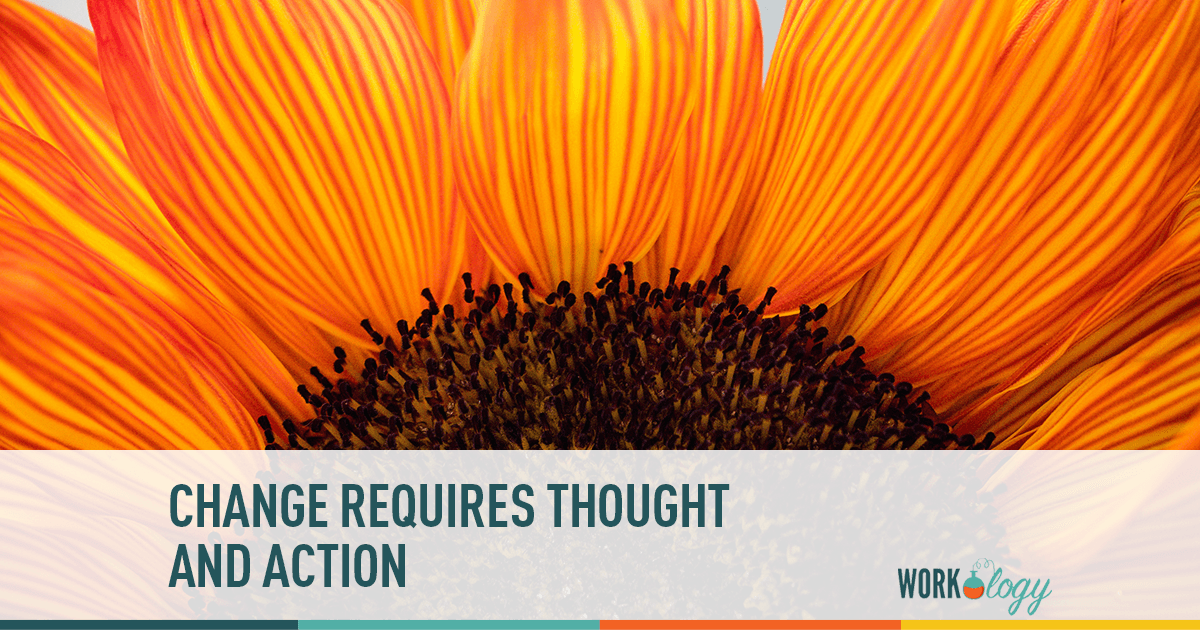 Change in an organization as well as in day-to day life is inevitable. It is the much needed catalyst that keeps our organizations and people from becoming complacent, stagnant and uninspired.

Change as they say is “the spice of life”.

I have found that while many enjoy speaking about the possibility of change, they loathe the journey towards it. You see, for change to happen you have to first admit that there is a reason to change. Once you have accepted the need to change you need to sort through the mechanics of the change- the who, what, when and why. Sorting through the mechanics of change is hardly fun, particularly when you are charged with taking an objective look at the efficiency or lack thereof of a function, group, or process. This is ultimately where the breakdown begins. As such, change is almost always left at the initial idea stage- solely because those involved are too afraid or unable to take appropriate actions to make it possible.

Change is not only a thought about how something can be different, it is an action. You can not change anything in your organization by merely believing in a concept, having a few meetings and putting up some fancy graphs and flowcharts. Real change in the organization begins when you have a well-thought out plan and you are prepared to take the actual steps to implement. If you chicken out before ideas for change see the light of day, you are missing a half of the equation.

Example #1 : Your department is guilty of being tree killers with all of the paper they utilize, so you decide you will go paperless both as a matter of being more eco-friendly and cost-effective. Going paperless will be a significant change of the way you do things. You look at your processes and decide that you aren’t willing to give up paper in most instances so you stop pursuing the paperless option altogether.

Example #2: You have a hiring process that could use some refining for the sake of the candidate. You sit down with your team to discuss where the bottlenecks are in the process.  In spite of your diligence in capturing the root cause of the problem with your lengthy hiring process, you and your team decide that there is nothing in the process that you can do without. With everything left pretty much the same- it is safe to say no change will happen here?

To be successful at both thinking up the change and implementing it- here are a few suggestions:

1) Plan for the change, but don’t overthink it. Depending on the magnitude of what you are looking to change, you will need a blueprint to work from, but by no means is that a license to ruminate over every aspect of it. Work with what is within your control.

2) Communicate the timeline and expectations for implementation. When the thought of change has moved beyond the realm of your mind to the ears and consciousness of others; you are now accountable for following through.

3) Know, acknowledge and work with your dissenters where possible- but continue to push the agenda. Whenever there is change, there are people that will dislike the idea before it has been fully presented. It’s important to acknowledge the presence, influence and opinion of dissenters; but do not let it derail you from ultimately making the change.

In essence, if you want to do things differently, you have to be able to manage the change and all of its moving targets without being persuaded to remain as you are today. Don’t just talk about change; carry it out.

together
al mismo tiempo
at the same time