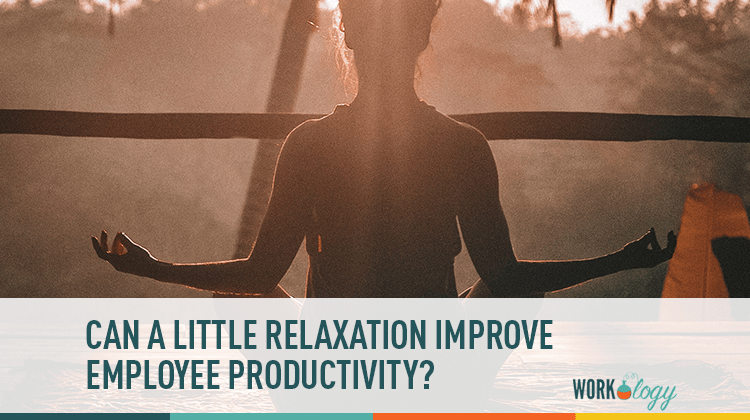 Do your employees need to chill? Today’s workplace is more stressful than ever before. A troubled economy means workers are afraid of losing their jobs and often willing to put in long hours to ensure they’re being valued. But is this actually helpful to your company in the long run? Or are these stressed-out employees burning the midnight oil actually burning out as well?

This shouldn’t be news to any employer, but stressed out workers make for much less productive workers. They’re also much less engaged–meaning if you have a highly stressed workforce, they’ll be more likely to leave for greener pastures. Employee turnover is costly, and so is dipping productivity levels.

So what can you do to get employees to kick back and relax a bit in order to keep spirits (and productivity) high? Here are a few suggestions:

Catch Some Zzzzs
A recent study published by Harvard Medical School showed nearly one-third of American workers aren’t getting the sleep they need to perform at peak performance. This leads to a net loss of about $63.2 billion in dropped productivity per year.

If you think back to a time when you were severely sleep deprived, there’s probably little overlap with the times you were at your most productive. Sleep is necessary for higher-level thinking, like the ability to think about a problem critically and find a creative solution.

Instead of engaged and productive workers, those suffering from sleep deprivation are probably taking part in a phenomenon called  “presenteeism”. They’ve physically showed up, but mentally they’re still sleepwalking through the day.

You can’t force employees to get the right amount of sleep at night. After they leave the office, you can’t stop your star workers from tossing and turning, catching a late night movie, or staying up with a fussy baby. But you can offer them a little shut-eye. Another Harvard study showed a 60- to 90-minute nap can improve memory function as much as a full night of sleep.

This is probably why big businesses from Google to delicious companies like Ben and Jerry’s encourage workers to count sheep with nap rooms. It might seem counterintuitive, but encouraging a tired worker to take a nap can mean increased productivity when they awaken refreshed.

Take Longer Vacations
Employees love vacations, but ironically less of your workers are probably packing their suitcases. A study from 2012 showed workers were leaving an average of 9.2 vacation days on the table. This is a large jump from even the previous year, when workers were still leaving about 6.2 days unused.

It might seem like a good idea to have your workers around the office more often. You obviously want to keep your superstars around–after all, that’s why you hired them. But without the ability to take off for far-flung locales and recharge their batteries, workers are likely to get stressed and overwhelmed. According to a 2009 survey, 34 percent of workers felt better and more productive after a break from the daily grind.

This might be why more companies are embracing flexible vacation plans. In fact, some companies have even decided to do away with standard vacation days altogether in order to promote unlimited vacations.

When connecting with talented job candidates, whether in person or through a video interview, being able to offer an unlimited vacation policy is a huge perk. Not only will these policies make you a more attractive employer, the policy will also show how much trust you have in your employees.

Few are likely to abuse the policy (after all, they still have bosses) and instead employees will be motivated to get outside and explore. Best of all, they’ll come back into your office refreshed and ready to tackle your company’s problems with new solutions.

Step Away From The Desk
This is a very, very simple problem with a very simple solution. More workers are ignoring lunch breaks to power through at their desks. In fact, one-third of all employees in a recent survey didn’t leave their desks for lunch, while another one-third didn’t even take a lunch break at all!

If not having a vacation is tough, imagine what it’s like to not even take a small break from the pressures and stresses of the day. Employees need to get out of the office or away from their desk in order to see things more clearly. Encourage workers to step out of the office during lunch and maybe even schedule weekly outings.

Relaxing at Work and Life

Smart employers realize workers need a break to refresh their brains and come back to old problems with new solutions. The way to maintain productivity is to encourage your workers to embrace a little more relaxation and a little less action.

Do you think relaxation works to increase productivity? How do you encourage your employees to relax? Share in the comments!