I’m Tired of Working and Living with Fear 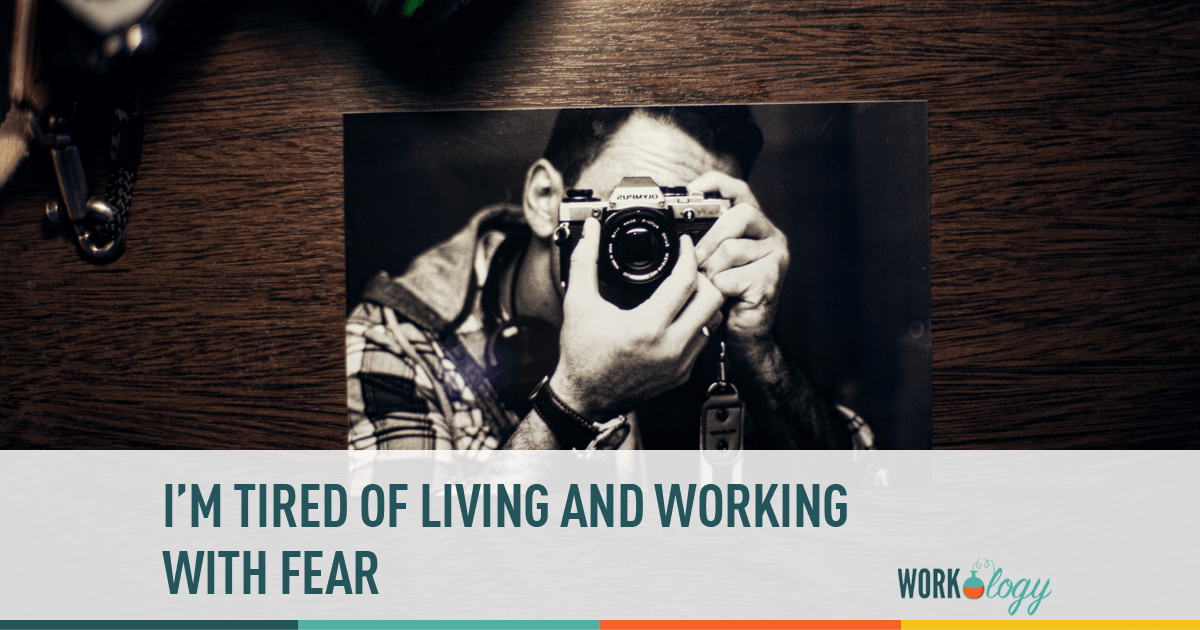 I remember the day very well. It was someone I looked up so much I’d placed them on a pedestal. This person could do no wrong. They had it all: success, wealth, popularity and a family that loved them. Or on the surface that’s what it seemed. It was one day they let their guard down. They let me see the real them for just a moment and I realized they were scared of being themselves. They were fearful they couldn’t duplicate or repeat their previous success. Fear was crippling the individual. They were so caught up in the persona they created they were terrified I, and others, wouldn’t like the real person behind the marketing and sales spinning.

This fear is keeping you from having your perfect moment whether it’s to fail spectacularly, surge into the spotlight, make a connection worth having or learn a lesson that can help you for the rest of your life.

It’s weird to be in that moment and realize that the person you adored above all was actually human. While that moment was awkward it was actually a good one for me — I learned from it. They had their flaws, insecurities and fears that were driving many of their decisions of the person they thought they needed to be.

Five Types of Fears Holding You Back

Medical experts tell us there are five different types of fears:

A few weeks ago, during my travels, I had a conversation with someone I’ve always really wanted to know. Over cocktails we let our guards down a bit, and I asked her why we’ve never connected, been friends or just hung out. Her response was fear based. She told me she was scared of a person who threatened her not to connect or get to know me.

Why I Won’t Let Fear Control Me

By no means am I a perfect person. I have many fears myself, however, how those fears controlled me changed in 2005 when I faced my abuser who was my then husband. Letting go of my fear of extinction, I told him that I would no longer let him hurt or control me. He drove by my house. He called my work and followed me home many times. I worried about my safety. I survived and he moved on, but through the experience I learned to not let my fears dictate my actions and control me. I kept living. I went to the movies. I had my first date as a newly single woman. I traveled. I thrived.

Before that, I didn’t give myself enough credit for the strength and confidence I had, or my ability to survive.

Looking back it was in that moment when I asked him to leave that I really took control and faced my fears. And now my past life feels like a Lifetime TV movie or a story of someone I used to know. It doesn’t really feel like it happened to me. But I remember and I work diligently to not let fear control my life because through embracing fear I found my strength. Because for seven years fear held me hostage and kept me from living, thriving and getting to know the real me.

Now, this woman I know, she is absolutely wonderful. She’s a strong, confident woman who is successful in business and whip smart. Was she just playing me? I felt sad and taken back. While I can’t make her face her fear, I encouraged her to do so because she is a bad ass. I want her to see the person I see.

Is It Just Me or Do Women Use Fear More to Control Each Other?

Last week I ran into another amazing woman with a eerily similar story. Fear was keeping her from being herself or doing what she wanted because she had acceptance. She let this person call her a friend because the person was popular and had a good reputation. She was scared about what would happen if she ended the friendship. Would this individual try to damage her professional image out of anger and hostility?

I began to consider that this fear is more common among women I viewed as strong, successful and confident. Fear is used to benefit their manipulator, or so-called friend, who in most circumstances seems to be a woman and not a man. The strong professional women I knew were in denial, caught in a vicious cycle, and couldn’t see for themselves how that fear is keeping them from doing amazing things.

I guess it’s a game that women play. They are bullying at work. Women play on the fear of acceptance and of fitting in with other women. I felt like I was back in high school where the high school bully reigns and no students stood up, confronted the mean girl and told her that they weren’t scared, because the alternative was uncertain. But I’m here to tell you that it’s liberating. Living without fear means being your own person, doing your own thing and making your own rules. Sure you make enemies, like the one woman who apparently mandated that others couldn’t get to know me. But so what?

Yes, sometimes it can be lonely because you’re moving to the beat of your own drum but it’s worth it to stand up to the workplace bully. We all have fears we have to face in our work and personal lives. I won’t fall into the downward spiral where I think I have to please or even be someone else just to fit in or keep my reputation. I won’t let my fears control me personally or professionally.