Be Humble. Be Kind. Especially in the Job Search 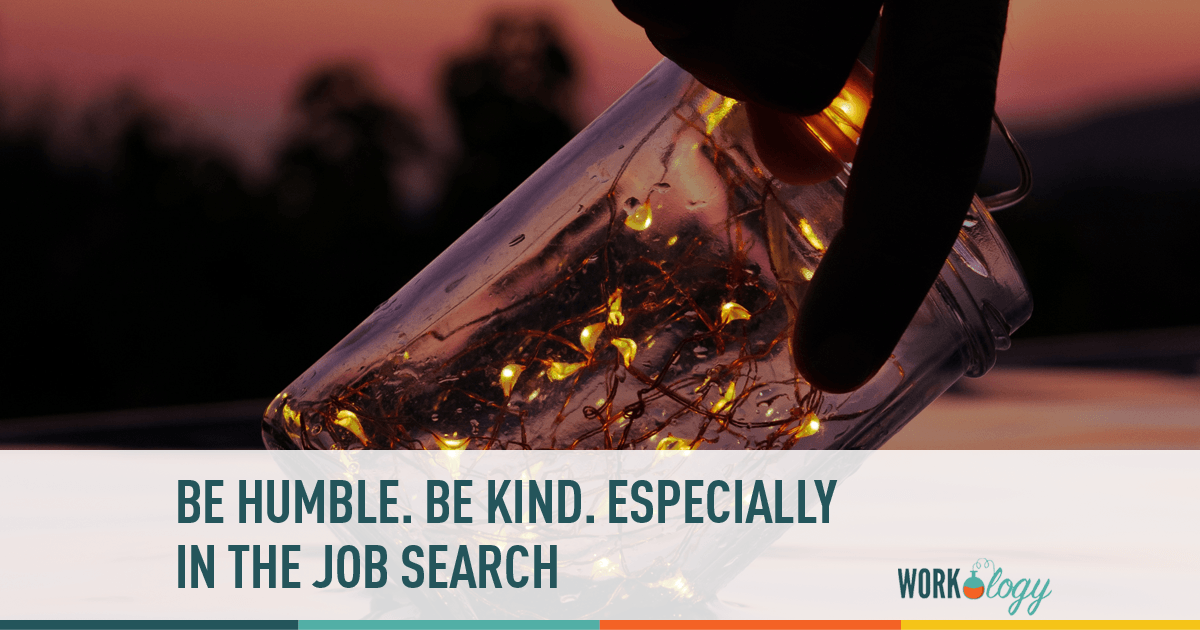 Last week while in the midst of 5 o’clock traffic, making my way to the grocery store for a single red onion, thinking about the day’s trials and tribulations, a song started to float through the radio waves that immediately struck a cord. Being a Tennessee resident this song was naturally of the country music genre, but its message crosses all tastes. The song was Tim McGraw’s “Humble and Kind.”

Be Humble. Be Kind.

In this song Tim (in a way only Tim can) sings about life’s values and how being generous of spirit, regardless of life’s challenges and achievements, is good for the soul. Being in an industry that is full of people puffing out their chests and “doing whatever it takes,” these lyrics were like sweet water for my parched recruiter soul. Unfortunately, in the business of recruiting we come across the worst of humanity as well as the best. Now, I wouldn’t say these “worst” are necessarily a norm, but they are a constant presence in the talent marketplace. It pays to “be humble” and “be kind.” Here are some insights into the not so humble and the not so kind type of candidates I often meet.

This candidate is one I’ve encountered more than a couple times, and far more often than I would have hoped for humanity’s sake. This is a candidate who upon receiving an initial call or email regarding a possible position, immediately jumps into how superior an individual they are, and how this job is certainly below them. (And if you’re extra lucky they may even question your value and proficiency as a recruiter…joy!) Then as the conversation progresses and the candidate realizes that this position is of desirable company, location, and compensation, a transformation takes place. In the place of a hardened and cynical candidate, now stands the picture of kindness and good cheer.

While these situations are normally salvageable for the candidate, they’ve already created a negative impression. Those negative impressions are not ones that I’d be shy about sharing with my most trusted clients either. Whether this candidate behavior is based out of frustration with the marketplace or pride in one’s own accomplishments, the fact is that you always reap what you sow.

It’s an unfortunate thing when a candidate’s overzealously expressed pride in their accomplishments actually tarnishes them, rather than enhances.

The “Be Humble and Kind” factor takes on a different form with companies. It’s normally less about blatant boastfulness and more about a misunderstanding of the market value of their employer brand. I’ve seen this go awry with companies of all shapes and sizes. Since they perceive their organization as the only premier employer in their area, their attitude towards talent acquisition and retention sours and becomes far more “me” focused. They can’t fathom that there may be employers with more attractive namesakes and salaries. While those organizations may not be located in their direct area, in a modern and mobile world, they are in fact fighting for the same talent pool.

As result of this less than broad view of the talent market place, current and future employees suffer as organizations the heavy lifting of talent acquisition and retention to employer branding, rather than offering competitive incentives or development programs.

Nice Never Goes Out of Style

Whether it’s working with a callous client or a cocky candidate it can be similarly disheartening. After all, as humans and as greater community are supposed to be striving towards compassion and helping the fellow man. Yet, ironically enough, it is in the realm of human resources that we have sometimes lost our way. So, hats off to Tim for producing a song in this day in age that expresses the values of humble and kindness, something that seemed to have belonged to a previous generation.

To quote my grandmother, a woman from a decidedly kinder generation – “It is nice to be nice.”