Ban the Box Is a Joke: Solution to Hiring Candidates with Felonies 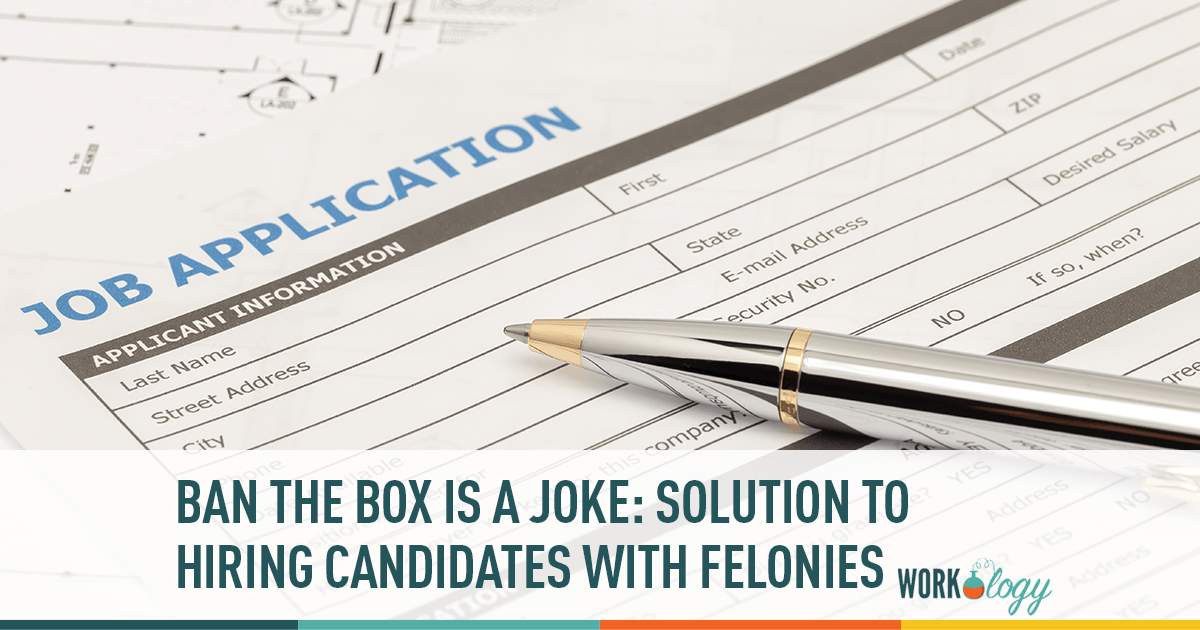 On Monday President Obama began directing federal agencies to “ban the box” in their hiring decisions, prohibiting them from asking prospective government employees about their criminal histories on job applications. Essentially, federal employers are not allowed to inquire as to a candidate’s criminal history until after the employer has provided a conditional job offer. Only then are employers authorized to ask a candidate about their criminal backgrounds. Additionally, employers must also be in compliance with local laws as well as the Federal Credit Reporting Act or (FCRA)

What Ban the Box Means for Employers and Job Candidates

The Ban the Box movement isn’t new. It “went viral” in the summer and fall of 2014 as New Jersey, Illinois and the District of Columbia signed the provision into law. Eighteen states and over 100 local municipalities have Banned the Box and counting. For more information, you can see the infographic below.

But Ban the Box surfaces a bigger and more complex challenge for employers. Companies are increasingly using background checks as a way to protect themselves from liabilities as well as criminals from working at their companies. Employers have a certain amount of discretion after a candidate fails a background check. As an employer, there are generally three reasons why prospective candidates fail a background check.

If a company is housed in a state that Bans of the Box, employers can only ask for your criminal history after the job offer. Candidates often assume a felony has been expunged from their record, were told employers don’t do federal background checks or just think their histories won’t be found because they did something like changed the spelling of their name.

The background check business in HR and recruiting is a big one. Keep in mind the entire background check and screening industry as a whole was a $2 billion industry in 2014 which includes employers, landlord and consumer reporting. Background checks as a whole have been on the rise as the economy has recovered. Employers are more concerned than ever on quality hiring and employee retention for their companies.

Candidate’s History is Inaccurate or Incomplete

This could include employment history, educational information or just background information that led to a red flag for a company. Employers use your previous mailing addresses to check local and state records and verify your schooling and employment using the information you provide.

The Candidate Has Committed a Felony in the Last Seven Years

This isn’t a hard and fast rule, however, I’ve had to fail a number of background checks in my time when it was learned a candidates we offered a job as processing payroll or handling money had a felony for bad checks or fraud. The best HR professionals evaluate failed or flagged background checks on a case by case basis. For example, I can’t hire someone with a history of DUI’s who would be driving a forklift for the majority of their job responsibilities. It’s a safety thing.

Just because you have a criminal job history doesn’t automatically mean a job offer will be withdrawn upon the completion of the background check. However, employers will be evaluating each of these on a case by case basis. Typically the rule is employers tend to look the other way if the felony has been more than 7 years unless it’s something really egregious like manslaughter or sex offenders. Employers want to keep their work places safe. Plus, they don’t necessarily want the PR fallout if something happens. It doesn’t mean that it will, however, the media loves a story and no boss wants to become front page news because of a bad hiring decision they made.

The Problem with Ban the Box

The problem with Ban the Box is that it delays the background check process, but it doesn’t eliminate or really change the employer’s decision making. Banning the box wastes the time of hiring managers and the job candidate. Banning the Box is a media stunt pure and simple. It’s doesn’t really address the challenge of job candidates who have a felony conviction in finding work.

Instead of the candidate knowing upfront the company won’t hire those who have a criminal work history, the candidate spends two or more hours of his/her time in job interviews not to mention the commute time and preparation for something that won’t be happening. As for the employers, Banning the Box only increases hiring and recruiting expenses because employers spend more time interviewing candidates which in turn is forcing them to invest in other hiring surveys and assessments to suss out the best candidates.

If the government really wanted to Ban the Box, they would invest in a government program like the WOTC also know as the Work Opportunity Tax Credit providing a tax incentive for employers who hired job candidates with a criminal record just like the do for those who have received government assistance or military veteran candidates. Employers can also commit to hiring those with a criminal history. If we ignore the problem, nothing will change. A checkbox isn’t our silver bullet to employing those with criminal histories. 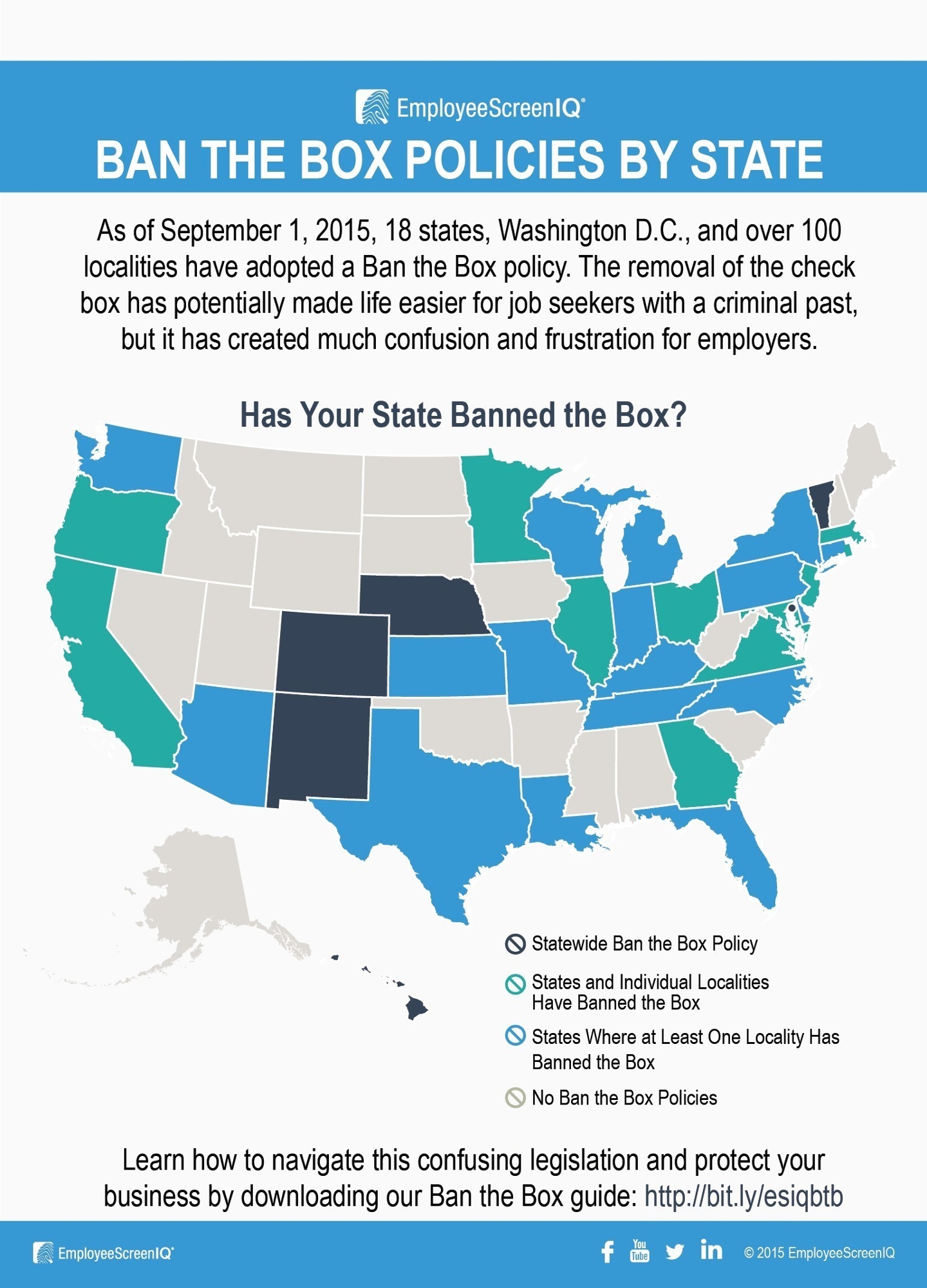