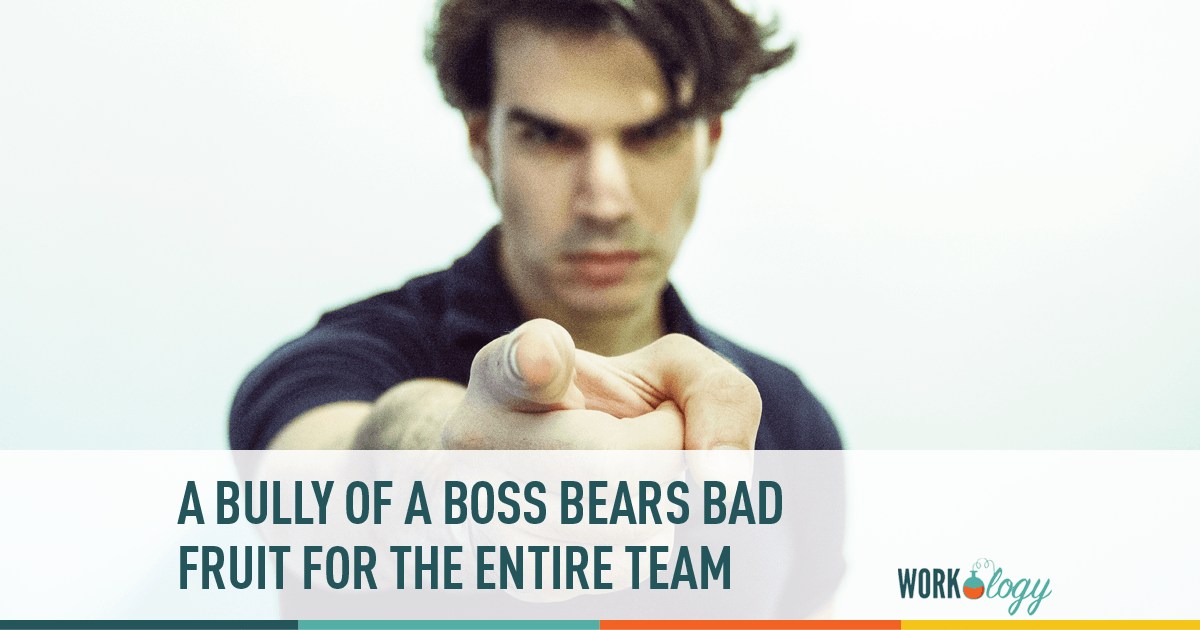 The phrase “People join companies and leave bosses” is as true today as it was 30 years ago with over 50% of  job seekers planning to leave their current job sometime this year doing so because of their boss. Just like with a cold being passed silently from one person to another, the toxic effects of the bullying of one employee can spread amongst a team to quickly cause it to fall apart. A bad boss bears bad fruit for the entire team and creates a toxic workplace.

When a boss (non-physically) abuses an employee that person definitely shows signs of disengagement and lower productivity, but new research out of Michigan State University and the University of Western Australia have shown that these negative work effects are transmitted and mutated throughout the rest of the team leading to greater intra-team conflict. The study looked at 51 teams from 10 companies in China and then followed up with 300 people in a controlled setting at MSU.

“That’s the most disturbing finding,” Lead investigator Crystal Farh said, “because it’s not just about individual victims now, it’s about creating a context where everybody suffers, regardless of whether you were individually abused or not.”

The non-abused members of the team model their behavior after their boss and begin treating one another poorly with the boss’s target bearing the brunt of the extra abuse. “Teams characterized by relationship conflict,” Farh said, “are hostile toward other members, mistreat them, speak to them rudely and experience negative emotions toward them.” A dysfunctional team may be the result of the employees having behavioral conflicts themselves, or it may be the result of the team leader abusing one or more of  its members. Finding this out can help the company provide a more positive and productive work environment and create longer-tenured employees in the process.

Another important cause of employee stress and conflict is that we humans will let our personal moral compasses be over-rid in favor of that of “our team”. This can be evidenced by the nasty and often violent clashes between opposing sports fans, political parties, ethnic and religious groups, etc. You may be saying to yourself, “Yes, those all happen, but that’s different. In business we’re working towards a common goal.” and to that I would respond. “When that is true, then there won’t be any of these conflicts.”

Businesses, like every other collection of humans, becomes a tribe, a family for the employees. When competition is directed outwards (e.g. Apple vs. Google) the employees rise up and help each other to protect “us” over “them”. On the other hand, when competition is between departments or within members of a single team, the employees will fight amongst themselves, hurting the company as a whole. Edward Lampert, the CEO of Sears doesn’t understand these principles and is slowly leading the 120 year old company towards bankruptcy. (Note: I’ll explore intra-company competition more in a later post.)

To understand the physical reasoning behind this, scientists at MIT, Harvard and Carnegie Mellon have been looking at the functioning of the brain when a person self-identifies as either an individual or as a member of a team. The researchers have been testing the hypothesis that people “lose touch” with themselves and their personal moral values when part of a group.

“This process alone does not account for intergroup conflict: Groups also promote anonymity, diminish personal responsibility, and encourage reframing harmful actions as ‘necessary for the greater good.’ Still, these results suggest that at least in some cases, explicitly reflecting on one’s own personal moral standards may help to attenuate the influence of ‘mob mentality,’” says Mina Cikara, a former MIT postdoc and lead author of the NeuroImage paper.

A Bad Boss Sets the Bar for Your Team

A strong leader will see the devolution of the group into such mob behavior and work to correct it, a bully boss will enhance it, supporting their favorites and further abusing those employees they do not like exacerbating the problem. From the CEO, down through each layer of management, the leader sets the tone for how the individuals beneath them will behave and are ultimately responsible for the atmosphere in which people work. Your boss sets an example even a bad one for the entire team.

Look throughout your organization, have any employes complained of verbal or emotional abuse from their superior? If you are working with them to heal that is great, but don’t forget that to truly recover  from this bully boss, you’ll need to help rehabilitate the entire team so that they do not keep any learned, counter-productive behaviors.