1 in 4 Baby Boomers Will Never Retire. The Shifting Workforce 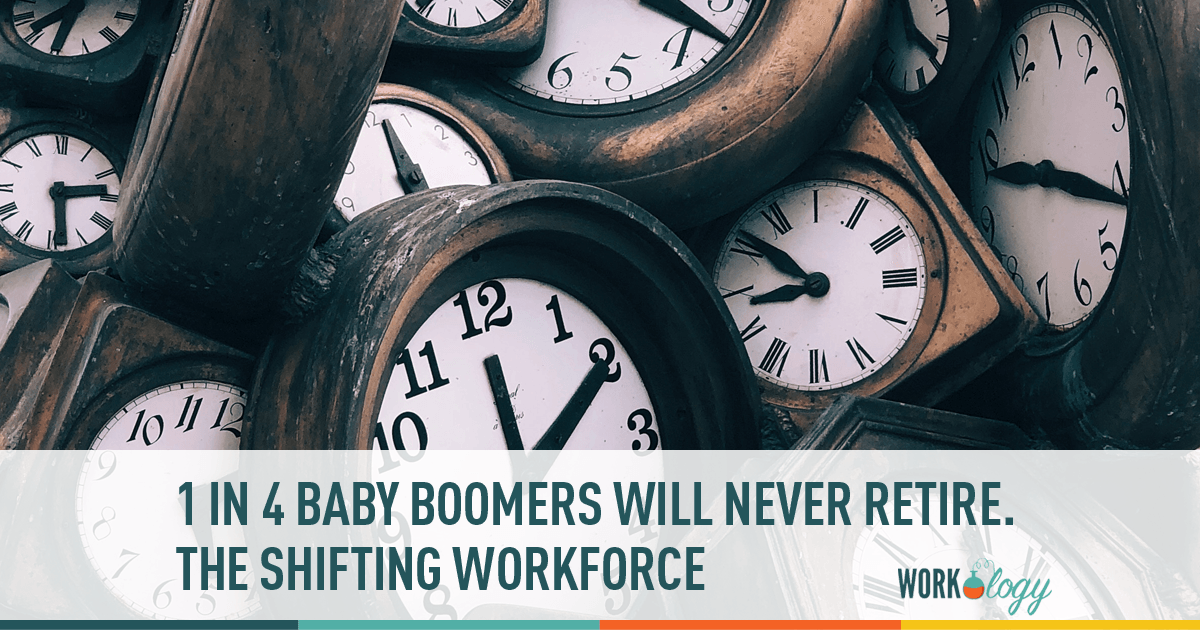 The Generations and Change in our Workplace

Brace yourself, HR — a big shift in the workforce is coming. You are facing a talent gap like never before seen, and the only way to overcome this gap is to find, attract, and engage the talent your organizations’ need to sustain their operations and grow their business. But before we get into what needs to done, let’s address what’s happening.

In the past, general population trends have also been reflected in the working population and the generations. As Tammy Erickson pointed out in a recent article, we have lived in a pyramid structure. The pyramid’s base included the biggest and youngest set of working people, the narrowing middle and top sections progressed from middle aged to older working class.

With the large population of 81 million Baby Boomers in the workforce and their desire to continue in their jobs and careers for various reasons, an inverted pyramid structure is forming.

However, two other major classes are influencing the shape of the current workforce. Gen Xers totaling 46 million are mid-way through their careers and Geneneration Y, or Millennials, comprising 85 million are entering their careers, so instead of reflecting an inverted pyramid, the population and workforce in general is more of an hourglass shape.

Aside from the obvious Baby Boomer phenomenon and the population expansion giving rise to the huge population of Millennials, the recession of 2007-08 and lingering economic stresses have influenced the formation of this new workforce. Baby Boomers are now looking to stay in the workforce past their retirement age. In fact, one in four Baby Boomers polled claimed they will never retire from work. Many lost pensions, retirement savings, and investments during the financial crisis…and they now must continue working because they have to. Others are simply still working because they can and they still want to!

Baby Boomers weren’t the only ones affected in the recession. Companies were also fighting financial cuts and constraints while still striving to achieve the bottom line. The line item with the most significant impact on a company’s profit had to be reduced. Mass layoffs and consolidation of positions were implemented in an effort to preserve growth. Everyone has been affected, and the Millennials are feeling the effects now in a big way. Though unemployment is at its highest rate in years, and with approximately 3.7 million open,  advertised positions, companies are still being increasingly, impossibly, selective in their searches. They want to recruit only the already employed who have the required experience to perform incredibly challenging roles — leaving experienced but currently unemployed and entry-level potential candidates out of the running for many positions.

With Baby Boomers having no place outside the workforce and Millennials not having a place in the workforce, how does HR address this current polarizing trend?

The solution is addressing the needs of the entire organization in your talent selection, workforce staffing,  and training regardless of generation or generational influences. While you may never be able to satisfy everyone in their roles, it is leadership’s imperative to find the right people for the company and fit them into the best roles. When you have the right people with the right skills, train them. Don’t neglect the induction process. Match them to experienced individuals and include them on project teams to immerse them into the company culture, processes, and systems.

Having an employee mentorship/training system benefits the entire organization because it smoothes the transition of external hires into an organization, as well as promotions of personnel into increasingly higher responsibility positions. Implementing a culture of mentorship through all levels of the organization encourages a virtuous cycle of training and continuity making everyone feel like valued members of the company. The health and direction of your organization depends on HR integrating both of these sides of the experience spectrum for years to come.

​What do you think? Is the ‘hourglass’ shape a valid representation of the shifting workforce? What other changes can HR departments make to address this challenge?

Tony Morrison is the Vice President of Business Development at Cachinko. Cachinko creates employer-branded career applications and helps employers leverage Facebook and other social networking platforms to find, attract, and engage their next rock star candidates. Contact him at amorrison@cachinko.com.