Association Is Not A Protected Category or Is It? 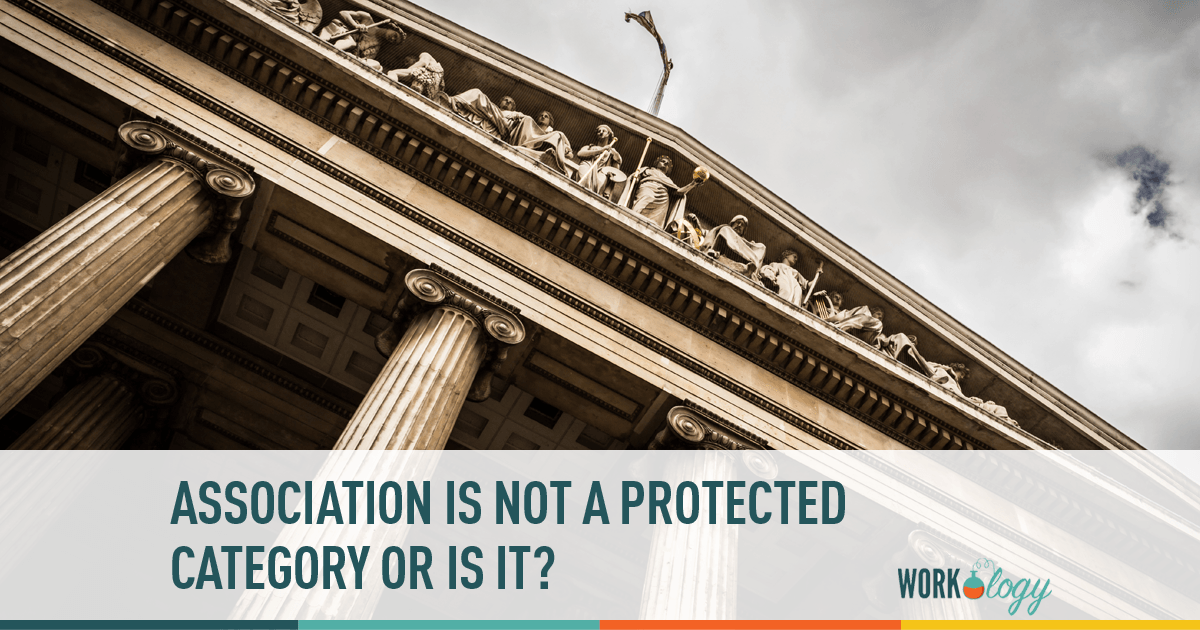 The answer to the question on whether “association” with someone who has “protected” status under the EEOC is “it depends.” Several court cases are allowing claims of associational to proceed or have been decided in favor of the claimants.

Let’s examine this situation in a couple of different examples. Under the ADA and ADAAA actual association with someone with a disability is a protected status. The law says discrimination includes “excluding or otherwise denying equal jobs or benefits to a qualified individual because of the known disability of an individual with whom the qualified individual is known to have a relationship or association.” (See 42 U.S.C. §12112(b)(4)) Thus, although the individual may not themselves have a disability they are still protected if they have someone with whom they are associated that has a disabililty and some job action is taken against them as a result of this association. Cases of this type have often centered around caregiver types of situations, such as a woman caring for a disabled child where the employer makes an assumption of the cost of insuring that child or makes an assumption of the distraction that the caregiver will suffer as a result.

Another associational type of case involves race, typically in interracial marriages or relationships. An example of this is the case of Holcomb v. Iona College (2008) where a white assistant coach claimed he was fired for being married to an African-American woman. In this case the court actually found that the employee was discriminated against for his race, because if he had also been African-American he would not have been discharged for his marriage. Other cases have involved white workers being harassed due to friendships with African-American coworkers.

The EEOC regulations have defined an area called FRD or Family Responsibility Discrimination. Their guidelines are intended to help guard against employers using stereotypes of how well a caregiver may work when faced with familial responsibilities, particularly motherhood.

There is also a growing area of associational discrimination in the area of retaliation. The banner case for this one is one I have written on before., Retaliation for a Claim of Discrimination Is a Big NO-NO Revisited. The case was Thompson v North American Stainless, LP which was decided by the U.S. Supreme Court. This involved two workers, one minority, one not. The minority filed a case of discrimination against the company, although she stayed employed. Soon after this, her fiancé, the non-minority employee was fired. He filed a case of discrimination based on retaliation for his fiancé’s filing.

What the SCOTUS decided was that question on whether he had the right to file such a claim, since he was not the one who had filed the case. They decided that indeed he did have that right. Their reasoning was “We think it obvious that a reasonable worker might be dissuaded from engaging in protected activity if she knew her fiancé would be fired.” They defined a “zone of interest” that employers must attended to when taking actions against employees. Thus the conclusion from this is that today you have to be aware not only of the individual employee’s protected activity but also his/her associates’ protected activity.

Steps to protect the company

What are the remedies that will protect an employer from these types of claims of discrimination or retaliation? As usual they include:

One issue that is raised by the specter of associational discrimination claims is the impact that social media plays in our interactions with our employees. The more we know about them through that media are we potentially going to raise more issues based on what is revealed about their associations? Think about it.