Age Bias Masks the Contributions of Young and Old 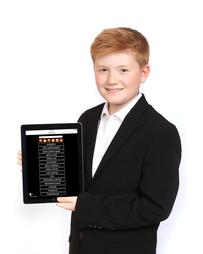 My wife told me a story about a 12-year-old named Alex Knoll who was on Ellen on the 25th of May. Alex was on to discuss an app he created called Ability App to help people identify the disability-friendliness of area businesses. Evidently, Alex witnessed a man struggling to open the door of a business and empathizing with the man recognized the benefit of knowing in advance what accessibility was available where. Presumably, I would like to think that such information would increase awareness of need and encourage more accessibility for all.

Age Bias Masks the Contributions of Young and Old

WOW! That is incredible awareness on Alex’s part to see the need and remarkable empowerment and confidence for him to believe that he could positively impact it. Kudos and thanks to Alex and congratulations too as I see that Shutterfly gave him a $25,000 check and Ellen committed support from her development team to fulfill his vision.

Similarly, at the opposite end of the age spectrum, I have seen in a few places, that Alan Alda, 81, has a new book out called If I Understood You, Would I Have This Look on My Face? The results of a quick Google search for Alan Alda includes a Wikipedia page indicating that his first television show was in 1958, first movie in 1963, and first stage credit in 1959. His most recent credits in are 2016, 2015 and 2014 respectively. Of all his work (he is credited for writing, directing, and acting), I still talk too much about Betsy’s Wedding. What has he contributed in 2017? Oh, yea, the book! His acting, directing, and writing have all garnered “a few” awards. He has four honorary doctorate degrees meaning that in addition to “playing a doctor on TV” he has all the rights and privileges of a doctor off TV. Still for all of his capabilities, maybe don’t go to him for medical advice.

In the area of communication though, he has A LOT of real-life expertise as Dr. Alan Alda is a Visiting Professor at Stony Brook University’s Center for Communicating Science.

WOW! That is an incredible amount to accomplish and at a level warranting a remarkable number of awards and accolades. Having started work on TV in 1958, his career spans almost 60 years. He is active in areas outside his profession but continues being called-upon to and contributing professionally as an actor and writer.

When does it stop? Harkening back to Alex Knoll, when should it start? I propose that the answer is NOW. It happens now. What happens?

First, in and for ourselves, we harness the mojo of Alex and Alan, or whoever inspires us. Bring it! Then, as leaders, parents, children, and friends, etc we can provide mojo to others with openness and encouragement.

By listening more, challenging more, and expecting more regardless of age and situation, we may discover that we are capable of more. Alex must have something in him to first recognize the person struggling, then both the opportunity and his ability to positively impact that struggle. I suspect he also has people in his life that mirror exhibit the same and encourage his sense of empowerment. Alan Alda’s father was an actor who wanted Dr. Alda to become a doctor directly rather than as a function of an acting career. My guess is that he had and has other collaborators, mentors, muses, and advocates.

Look around. Look in the mirror. In whom might you find incredibleness or remarkableness hidden by limiting stereotypical expectations of age or situation?