How to Deal with an Abusive Boss or Colleague at Work 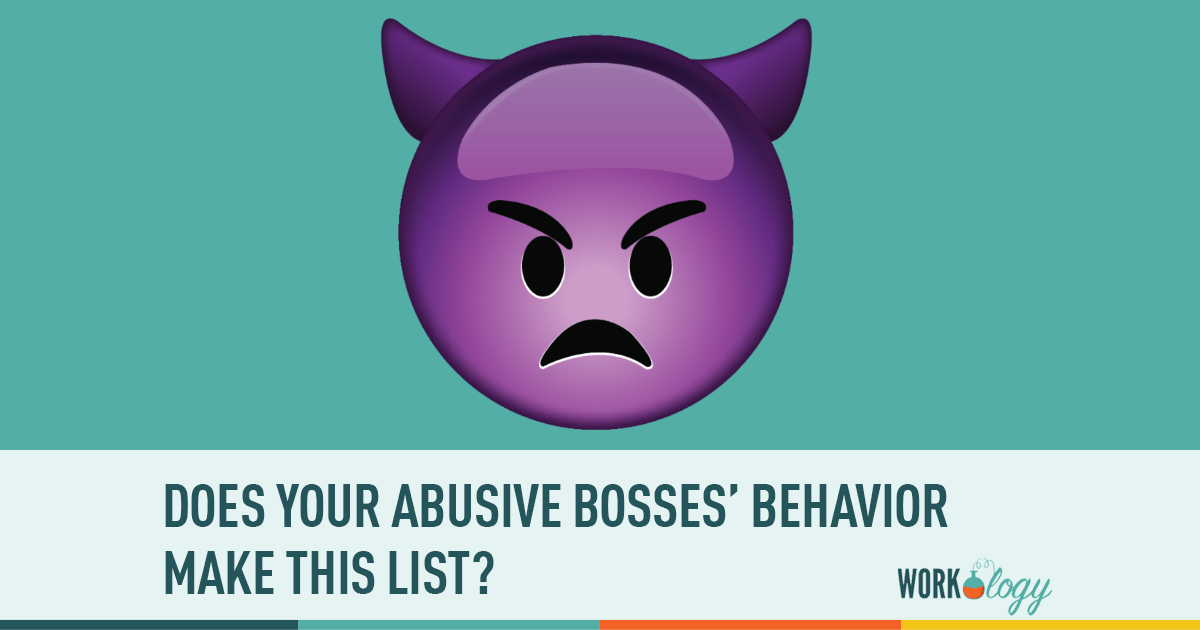 I think we’ve all, at some point in our careers, have had to deal someone at work who was abusive—whether it be a boss or peer. Sometimes they are intense. Other times they are too demanding. Often times they are a micromanager, but it can cause great stress and force an otherwise stellar high-performer to make a career decision that impacts them professionally. If you’ve had one, you know it. But as someone in an HR leadership position, how do you identify a problem that hasn’t been (and may never be) brought to your attention? And if you’re experiencing abuse from a boss or coworker, how should you handle it?

How to Deal with an Abusive Boss or Colleague at Work

First, let’s define what an abusive boss is. You know what “hostile work environment” means. If the driver behind the wheel of a specific hostile work environment is in a supervisory position, his or her direct reports are potential targets. You’d think they’d be easy to identify, but considering that your typical employee’s response to a ranting, raving, micromanager is to duck and cover, you might not know who they are.

Researchers working to determine whether abusive bosses share certain personality traits have ended up with some unexpected findings. Going into the study, the team of psychologists from the University of Cambridge in the UK and Katholieke Universiteit Leuven in Belgium guessed that if abusive supervisors had any personality trait in common, it would likely be low agreeableness.

Some Thoughts About Abuse in the Workplace

Instead, here’s what the study showed:

Contrary to what the researchers had anticipated, the abusive supervisors ended up being more conscientious as a group than the non-abusive supervisors. This was unexpected because conscientiousness is associated with being organized, rule-abiding, thorough, hard-working and disciplined, none of which necessarily scream “abusive boss” right off the bat.

One possible reason for the connection is that more conscientious people can be less flexible, tend to place more importance on high achievement and might get more frustrated when their subordinates don’t live up to high standards.

Although the recent study is the first to find a link between conscientiousness and being perceived as abusive by one’s subordinates, researchers have previously looked at other personality traits abusive bosses share. A 2010 study found that supervisors considered more abusive by their subordinates tended to score higher on Machiavellianism, a personality trait associated with being manipulative, deceptive, cynical and selfish. Combine these characteristics with a penchant for being rule-abiding, hard-working and achievement-oriented, and you can start to see how you end up with an individual you might not want to work for.

This is a hot topic in leadership and performance. Having lower emotional intelligence can often result in miscommunication and lack of empathy from your manager or boss. If you’ve ever been in your boss’s office apologizing for an error and explaining how you corrected it, at some point you’ll realize the only way to make your boss happy is to literally turn back time. They don’t want to hear your solution and how you’ve ensured it won’t happen again. They want you to UNDO IT. Lack of empathy and reasoning can make for one heck of an abusive boss.

So now that we’ve identified some key personality traits of the abusive boss (your abusive boss? Sorry…), here are some tips on how to handle it professionally without losing your motivation or allowing your morale to be negatively impacted.