How to Handle Your Abusive or Aggressive Boss 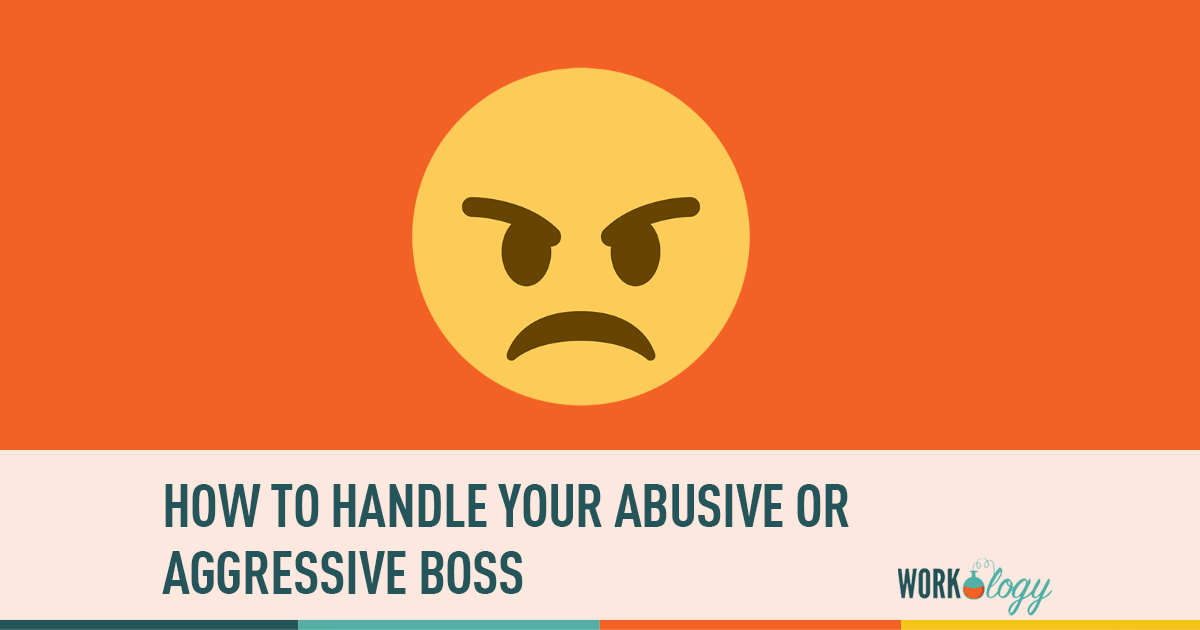 One of the worst things I have ever experienced in my corporate career is dealing with an abusive or aggressive boss. You know the type. He/she won’t stop giving you grief. Maybe they yell or berate you in front of others. Sometimes they laugh their behavior and inappropriateness off as a joke or even worse they apologize over and over again. My least seems as though it happened yesterday. I was dealing with a complicated work situation where I wasn’t the boss, but my title was higher up the food chain. The person, however, was a family member of my boss which made things very complicated and difficult. I dealt with a ton of passive aggressiveness and grief because I was brought on to shake things up and drive change. I’m a direct person and have never done well with any of this behavior which is why I thought it particularly important to share.

How to Handle Your Abusive Boss

When confronting an abusive supervisor, employees often assume they have two choices: confrontation or avoidance. But new research, forthcoming in the Academy of Management Journal, suggests a third option: Targets of abuse can flip the script, shifting the balance of power in their favor when bosses make life miserable. As subordinates gain leverage over time, they can strategically influence supervisors to stop abuse and even motivate them to mend strained relationships.

Sometimes the best way to deal with an abusive boss is to establish a commonality. Find something you have in common that you can focus on to start to build the professional relationship. If your boss is egotistic, choose something that he or she is specifically interested in, like coding, and ask about projects. If low emotional intelligence is the problem, choose something you’re interested in that will make your boss see you as a human being, not just another line item on his quarterly budget. Go out of your way to have a chat at lunch or on breaks – or if you have weekly meetings, lead with a quick “how’s the project XYZ moving along?” to demonstrate your interest.

Speaking of Coalition Formation: What to do when you see this kind of behavior happening at work to others? We’ve all been taught to stand up to bullies, but no-one tells you how to stand up to the bully who can get you fired. First, send them a link to this post. Second, DO NOT volunteer to go to human resources on their behalf. Coalition, yes. Interjection, NO. Depending on the type of treatment you’re witnessing and who the other person is in relation to your role, encourage them to try some of the techniques on the list.

When It’s Time to Go to HR

Most importantly, if you see this kind of behavior happening at work to others, be the one to stand up and try help influence the behaviors. No one deserves this kind of treatment. And while you’re standing up, make sure that you’re not inadvertently the bully in the office. If you can’t identify one, great. But you should also perform a “self-check” to ensure you’re treating team members and everyone you work with as you’d like to be treated.

Being the kind of supervisor or team member who is invested in the success of the whole team and the whole company through coaching, cross-team training, and just general pleasantness, means that you’re setting an example for how you expect to be treated and how you expect others to treat you.