6 Ways to Advance Gender Equality in the C-Suite 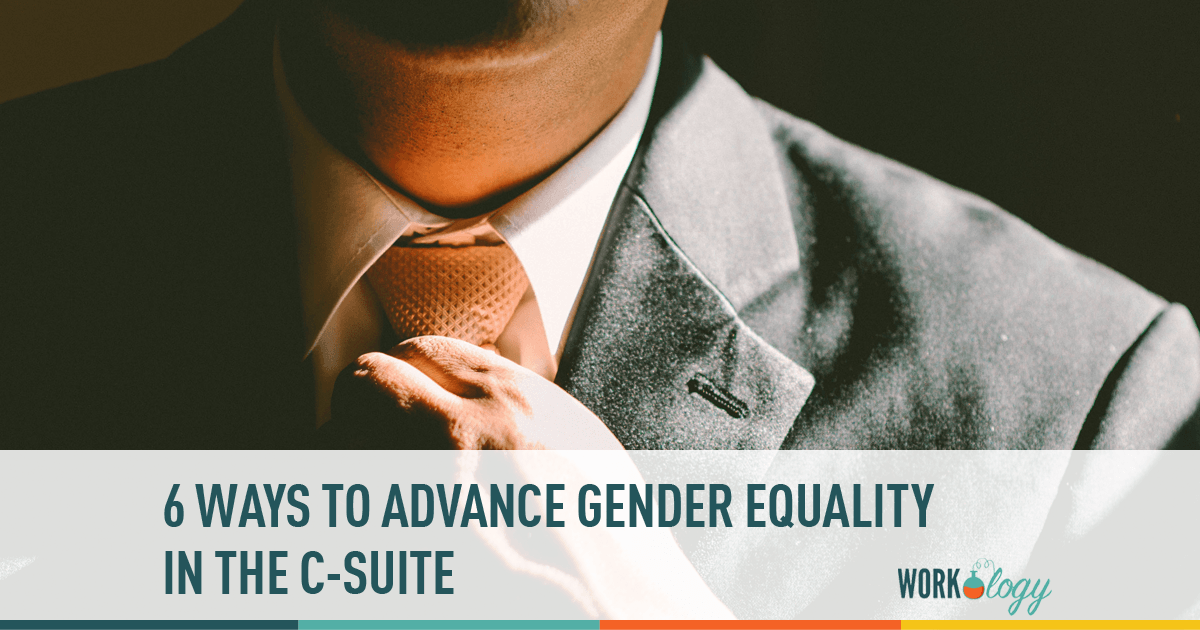 In 2016 top management still looks old-school. Despite research showing that professional women have the same leadership aspirations as men and plenty of evidence that companies with female CEOs outperform those led by men, only five percent of S&P 500 companies’ CEO slots are, in fact, filled by women.

When it comes to gender equality in the C-suite, the gap between vision and action is wide. In an October 2015 study sponsored by Weber Shandwick and KRC Research and conducted by the Economist Intelligence Unit, 73 percent of global senior executives surveyed believe that women will occupy an equal share of C-level jobs in multinational firms by 2030. Yet only 39 percent of these same executives ranked gender equality as a top-ten business priority, and only half admitted they have established goals to get there.

6 Ways to Advance Gender Equality in the C-Suite

What to do? The way forward (or upward) is not easy, nor will it happen overnight, but organisations could make significant progress toward promoting women into the highest levels of business by focusing on these six areas:

In the case of gender equality in the workplace, many organizational leaders don’t yet appreciate the extent that business structures and attitudes work against women attempting to climb the ladder. “They have to see from top management down that the system favors men over women,” says Diana Bilimoria, KeyBank endowed professor of organisational behaviour and director of the Women in Leadership programmes at Weatherhead School of Management, Case Western Reserve University. She stresses that the bias toward valuing men’s contributions at work more than women’s is subtle and implicit, and that awareness is the best way to guard against it.

Weatherhead’s executive education programmes for emerging and current women leaders help them understand the system and how to overcome it. Others do the same. “We call out and identify the things that women do that put them at a disadvantage, like not taking risks and not showing confidence,” explains Elana Weinstein, programme director at Athena Leadership Center at Barnard College and co-director of Women in Leadership: Expanding Influence and Leading Change. The programme is a joint venture between Barnard and the Columbia Business School and is aimed at mid-level female professionals poised to take on higher roles.

2. Action From Top and Bottom

Bilimoria believes that only a CEO-lead effort to change the organisation to a gender equal one will be effective: “It should be like introducing any transformational management approach, such as TQM or lean manufacturing.” Weinstein agrees that CEO’s must be fully committed and make parity a priority, but underscores the importance of ground-up pressure, too. Policy changes that facilitate equal opportunities for women leaders can also be pushed, for example, by employee groups, affinity networks and even clients.

To give female leaders the skills to push for these changes at an individual level, Columbia’s programme coaches them on the power of strategic networking and on the importance of storytelling, or how to communicate and pitch ideas in a compelling way.

Weinstein cites Google as one company that’s leveling the playing field for women. Google has empowered its leaders to offer tours of duty (limited employment tenures) to the most promising hires. Although that means losing some female leaders, it helps the company attract some of the best ones and prepares these women for greater leadership roles elsewhere.

Bilimoria believes a targeted infusion of resources is what makes the National Science Foundation’s Advance Programme a model of gender equity for others to follow. The programme promotes women working in academic STEM careers through a multi-level strategy that addresses everything from university recruitment procedures and flexible career policies to career support programmes for women.

Informal mentoring is most effective, according to Weinstein, because the pairing methodology of formal mentoring programmes often fails to create good partnerships. In Bilimoria’s experience formal mentoring initiatives by companies fizzle out unless they are administered well – mentor-mentee pairs need to fit well together, and both sides need to be held accountable for the progress made.

One way to chip away at workplace gender inequality is to make employee pay rates an open book. According to Bilimoria, silence about salaries creates a breeding ground for bias, and she advocates that organisations conduct salary analyses to reveal inconsistencies. Weinstein agrees, and is also hopeful that the initiative by U.S. President Obama requiring federal contractors to file employee salary data with the government will encourage companies to move toward transparency.

Rita McGrath, associate professor of management at Columbia Business School and co-director of the Women in Leadership programme, argues that an important factor in getting women to the top is encouraging more into line management positions and away from “female-only ghettos” like HR and legal counsel. Concentrating on women in line jobs, Weatherhead has launched leadership labs for high-potential women in STEM and manufacturing careers, where they continue to be underrepresented at all levels.

Demographics will also play an indirect role in making gender equality in the C-suite a reality. McGrath believes that as baby boomers retire and millennial take their places, management priorities will shift to reflect millennials’ values around work culture – particularly their desire to work for people-focused organisations. Hopefully, it will help speed up the pace of a change long overdue.