55% of Americans Are Cool with their LGBTQ Coworkers 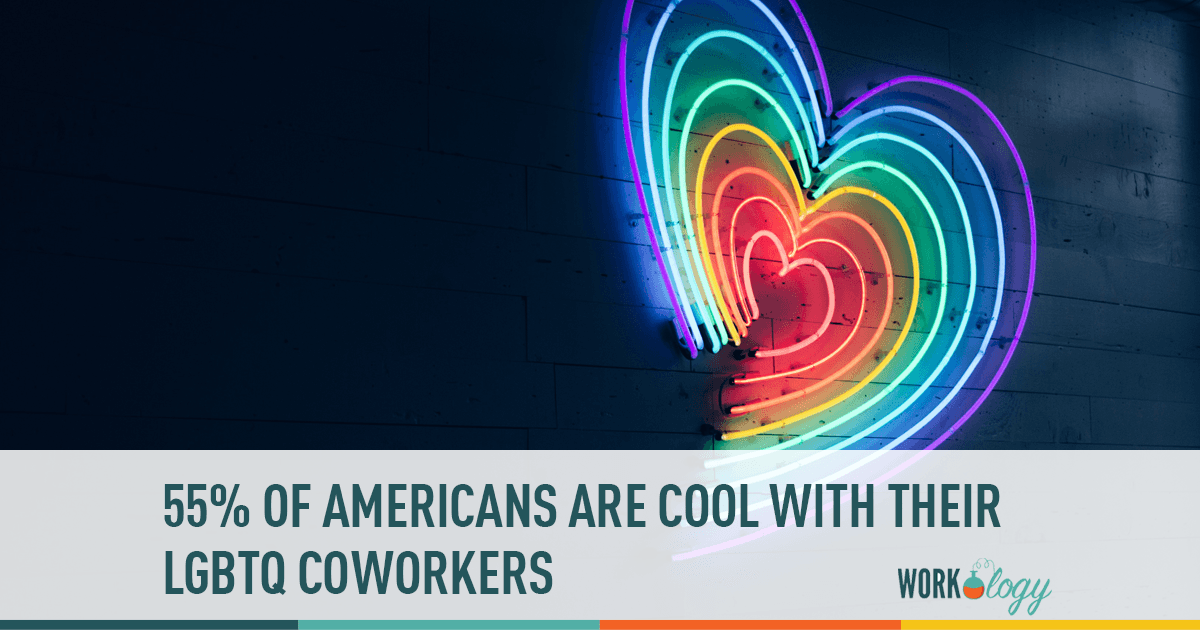 According to a new study, 55% of Americans are ok with their LGBTQ coworkers… but what about the other 45%?

Propeller Insights and Bospar Public Relations polled 1010 Americans about gender, sexuality, and their attitudes to their LGBTQ colleagues. They found that the majority of respondents had no preference about their colleagues’ gender identity or sexual preference – that is, most Americans are just as happy to work with LGBTQ people as they are straight and cis people.

But a whopping 31% of respondents said they preferred to work with straight people. Acceptance was also markedly higher for gay men and all cis people.

LGBTQ Acceptance On the Rise

These results echo previous surveys showing that acceptance for LGBTQ people in American is on the rise, at least when you look at the issue in terms of decades. Ordinary Americans are increasingly tolerant of all gender and sexual minorities, no matter their age or party affiliation.

The Propeller/Bospar study did not lend credence to the common sense idea that Millennials and Generation Z are more tolerant than older Americans. Only 47.9% of Baby Boomers said they had no gender or sexuality preference in coworkers, compared to 60% of older Boomers and seniors. With Generation X at 59% and Millennials at 56.7%, that means that the oldest working Americans are actually the most tolerant! The only exception to this trend being that younger Republicans are more likely to be tolerant than older Republicans.

However, several polls showed that acceptance actually dipped last year, the first in four that it did so, and that LGBTQ Americans were more stressed at work and in their daily lives. With LGBTQ civil and workplace rights being a constant presence on ballots and in courtrooms, that should be no surprise.

The two most important things to take away from this survey are that anti-LGBTQ sentiment remains high and that your oldest workers may be some of your most tolerant. Despite the majority of Americans saying that they’re cool with their LGBTQ colleagues, 31% report that they’re less comfortable and that they would prefer to work only with straight and cis people. That’s not a surprising result, but something you should keep in mind as you build diversity and inclusion programs at your work. That older Americans are more tolerant than common wisdom tends to paint them, is something that you should explore in your workplace: you may find unexpected allies.