5 Things to Consider About the Gig Economy 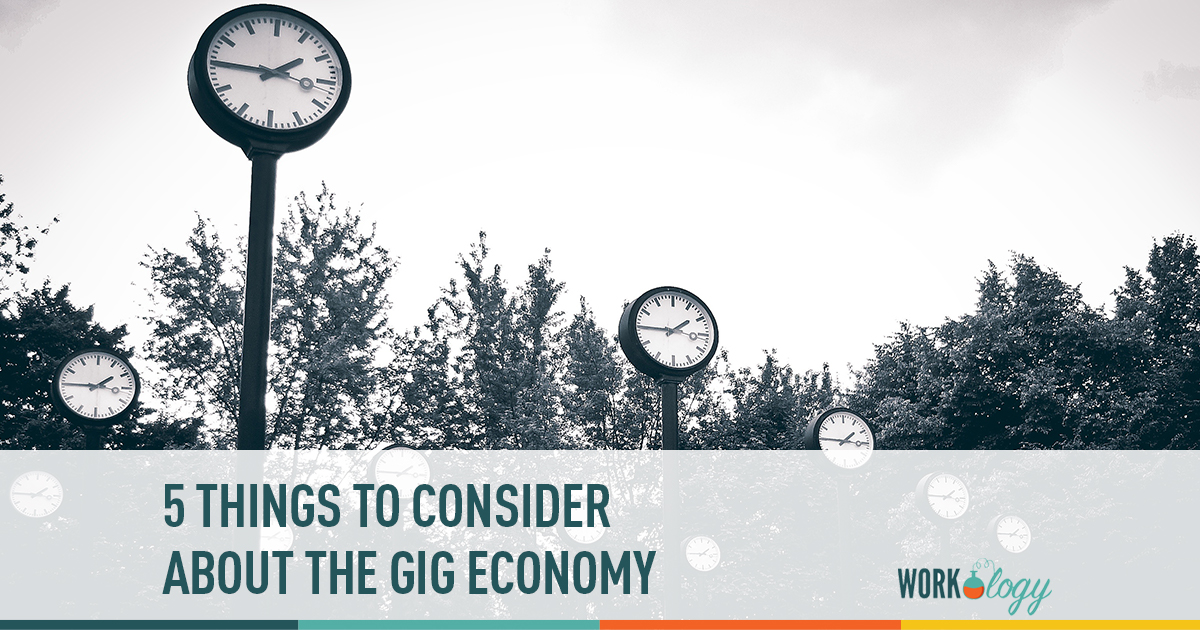 Something I’ve been thinking about a lot lately is what role HR will have in organizations that are increasingly reliant on contingent workers. HR itself is difficult to automate, like most things that involve complex human interactions and constantly shifting needs, and as proven by disasters like Zenefits, it’s difficult to outsource, save in very small businesses. There will be a need for HR, or an HR-like department, so long as there are actual human resources — people — in the workforce. But HR typically only has responsibility for full and part time workers, having little contact with contractors, whose personnel issues are more commonly sorted out by their agency, if they have one, their direct supervisor or even bookkeeping, where relevant.

But that leaves a grey space doesn’t it? Particularly for companies that rely on contingent workers that come and go, either seasonally or at need. HR maintains a talent network consisting of current, former and potential employees, keeping in touch with them, developing relationships over time and even learning from them — but who’s doing that for the contractors who are so important to so many organizations?

That’s why today I thought for this Friday’s link roundup we’d consider the gig economy / contingent workforce and the impact it’s having on more traditional labour.

5 Things to Consider About the Gig Economy

A new study of how companies are using contingent labour shows that more and more are relying on it for strategic and even core business needs. According to the Contingent Workforce Survey,

Almost three-quarters of organizations say their contingent workforce is effective or very effective, and more than 70% believe the use of contingent labor is strategic to specific business functions or to the business as a whole.

Of course the surveyors are invested in speaking with organizations that are already involved with the contingent workforce, so these results should be considered against other surveys but it does seem to be the case that reliance on contingent labour is growing, and so is confidence in it.

Earlier this month New York City became the first in the USA to launch legal protections specifically for freelancers. The law compels employers to pay freelancers as agreed and within 30 days of the work’s completion, at penalty of a fine. It also creates some protections for freelancers from employer retaliation. Anyone who’s done freelance work knows how important this act is — freelancers can sometimes spend months trying to get paid for work done in good faith, and those working long contracts experience many of the pitfalls of regular employment with few of the perks. One of the key changes the law makes is that

[w]ithin two years of being stiffed, a freelancer can now file a complaint with the city’s Office of Labor Standards, within the Department of Consumer Affairs. The office director will then draft a certified letter to the employer within 20 days, explaining how the freelancer’s contract was allegedly breached. Best case scenario, the law will scare employers straight before a freelancer has to resort to claims court.

One growing concern about contingent workers is regarding their health. Contingent workers tend to have higher levels of stress and poorer health overall — even some of the higher paid contingent workers. This is the same kind of stress-related health issue that we’ve seen in other parts of the workforce, where employees are being pushed to their limits. Labour organizations and government bodies in the US and elsewhere are paying more and more attention to the issue — though so far, few countries have proposed substantive legislation in this area.

But simply considering the health of contract workers should be a priority for all companies. No one should be in the business of chewing and spitting out their workers simply because it saves them a few coins.

How to Avoid Regulatory Fire in the Gig Economy

Worker classification! Ugh, so boring. But so important. Worker misclassification has led to some big lawsuits in the past and it’s been a consistent problem in startups with inexperienced founders and managers. Understanding the differences between full, part time and contingent workers, both legal and practically, is essentially to avoiding a big legal blowup. But it’s also something worth auditing regularly, in order to understand the real labour needs of your business — are you over-relying on contingent workers when dedicated full or part time workers might actually get you better results? Inexperienced or cheap managers sometimes make these decisions based on expense, as in minimizing benefits and liabilities, but how you classify your workforce and what its makeup should be (full, part time, contingent) is much more complicated than that.

The Rise of the Blended Workforce

When we talk about the blended workforce we mean that increasingly a company’s workforce is comprised of a combination of full and part time employees as well as contractors. This creates certain complications for departments that are used to dealing with workers in one standard way, such as IT, HR and accounting. But more importantly, it also requires that HR and senior management reexamine their people strategy, that it rethink how it interacts with its talent network, and what it should expect from each segment of the workforce. This piece by recruiting consultant, Jamie Grant, looks at ways to change your strategy without compromising your values.