5 Things Employees Will Screw Up For Everyone During The Summer 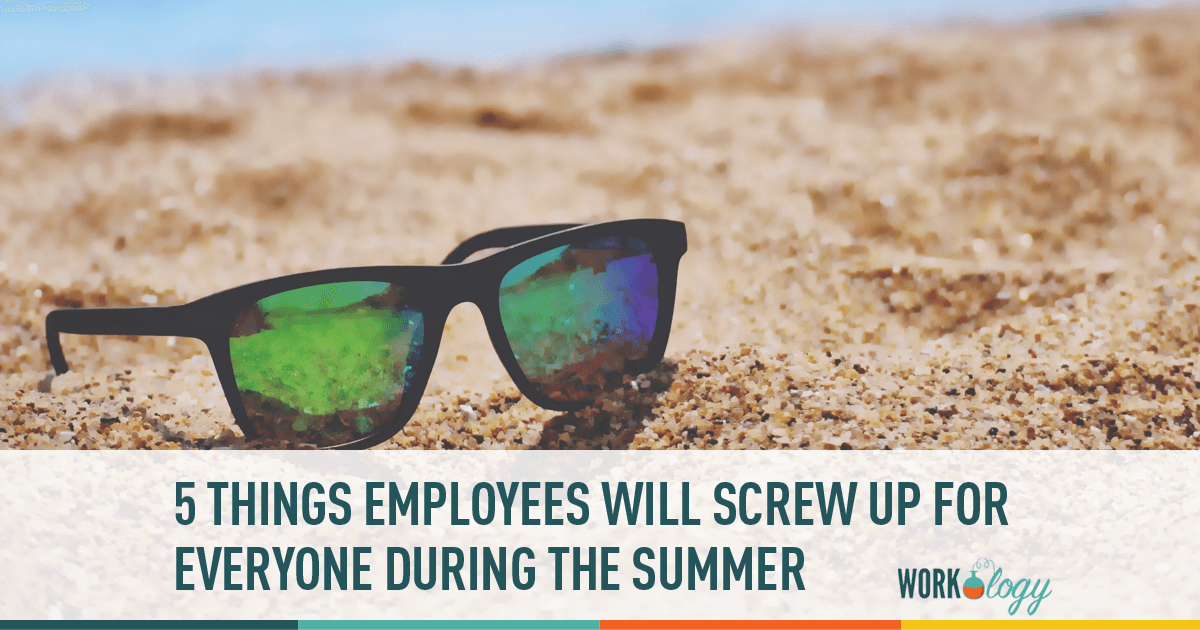 Summertime is one of my favorite times of the year. Work and life feel a little lighter in the summer as you plan vacations; attend barbeques and other fun outings. In fact, some businesses run on a lighter schedule for the three months to allow people to do what they want and need to.

I have worked for a few companies over the course of my career that have been great about allowing for greater flexibility over the summer. Almost always, there were one or more employees that screw it up for those of us that wait all year to let our “hair down” so-to-speak.

5 Things Employees Will Screw Up For Everyone During The Summer

So for those that will inevitably crash and shut the summer flexibility party down for the rest of us, here are the five things you spoil for your co-workers:

1)      Your company is kind enough to waive their rule of women having to wear hosiery with dresses and skirts for the summer months. One of your co-workers takes heed and also wears the tiniest little skirt she could find in her closet to wear to the company’s client meeting causing a stir.

2)      Who doesn’t want more time to do the things they love or time to just do nothing at all? Knowing that this is true, your company allows for 1pm days on Fridays as long as deadlines are met and everyone arrives on time.  Your dear co-worker one cubicle over decides the whole of Friday is “free time” and spends over an hour gossiping on the company phone with a friend instead of working. After several warnings, your boss decides it is far more productive for everyone to be there the entire day on Friday and cancels “Summer Fridays”.

3)      “Dress Down Friday” is instituted the first week of June.  Your company will allow everyone to wear jeans on Fridays as long as it is appropriate. They state there is zero tolerance for cut-off jeans or jeans that show more than most would like to see. On June 1st, your co-worker wears jeans with cuts right below the buttocks. Guess what happened to “Dress Down Fridays”.

4)      Music lightens the mood, so your boss decides to start something called: “Wind down Wednesdays” where every team will rotate bringing in their summer playlist.  All management has asked is that the music be appropriate sans cursing, racial slurs etc. A few weeks of this really did something for morale until Jeff in Accounting comes in with his eclectic playlist that includes Jay-Z’s “Dead Presidents” – great song, a hip-hop classic, but too gangsta for the workplace. Deciding that one infraction is enough, “Wind down Wednesdays” become a thing of the past when the manager shuts it down.

5)      Your new CHRO would like to get to know his employees better so he plans a family BBQ. He maintains that there will be lots of food and games to be enjoyed but encourages employees to bring a homemade dessert or drink; while cautioning that the drinks should be non-alcoholic. The office loudmouth decides with others that he will bring liquor disguised in water bottles so they can really “party”. One of the bosses overheard what this group did; they were not only thrown out of the barbeque, but no further summer after work activities were planned.

Despite what we often hear, there are some companies out there that get the whole ROI on flexibility thing. In return, they are willing to allow for some fun to lighten the load of the daily grind. At times, it is the employees that are their own worst enemy. The point of me sharing these scenarios is 1) to let you know that I have encountered all of these situations over the course of my career; 2) each time one of my beloved summer activities was tossed out, I was both shocked and angry as hell that I had to suffer with the fools that did these things.

A piece of advice, summer like all other seasons comes once a year. If your company is kind enough to allow some leniency for summer fun, follow the rules and try not to spoil it for the rest of your team.