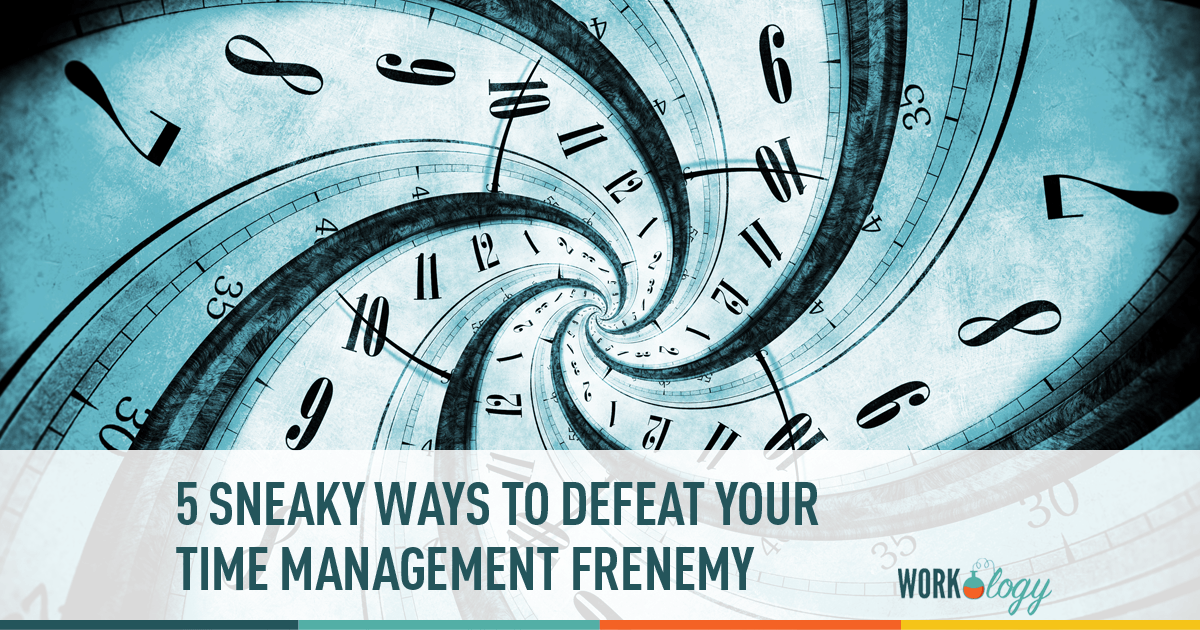 Keep your friends close, your enemies closer, and your frenemies glued to your hip with wacky tacky. That’s how the saying goes, right? When it comes to time management, it’s sage advice. Phone calls, emails and other interruptions may be proven time management enemies, but the real threat is infinitely more insidious in its subtlety. The real threat is you.

The human brain is an elegant machine, to be sure, but it also has some fairly conspicuous performance limitations. Unfortunately, the modern workplace gives these limitations little consideration. In fact, nearly every aspect of office life is tailor-made to drive you nuts. Observe:

The phenomenon is called decision fatigue, and it affects pretty much everyone with access to email. Here’s what happens:

The prefrontal cortex (the part of the brain that makes decisions, prioritizes, and solves problems) needs a ton of glucose to run. The harder your brain is forced to work, the worse our judgement becomes. Check. To combat the consequences of poor judgment, our brain responds by refusing to make decisions at all. After about 10am, we just stop making an effort. Jonathan Levav of Stanford and Shai Danziger of Ben-Gurion University studied this phenomenon by examining parole judges in Israel. All circumstances being equal, the researchers discovered that the odds of the judges granting parole were about 70% early in the morning. By late afternoon, there was only about a 10% chance the judges would be lenient.

Here’s What to Do About It: Focus on making your hardest decisions early, before you get tired. Schedule your planned or routine work for later in the afternoon.

2. Once your brain shuts down, it’s nearly impossible to prioritize.

The ability to evaluate trade-offs and opportunity costs is uniquely human. For this reason, it requires a ton of metabolic fuel to run. When our brain gets tired, we shut the power to the part of the brain that solves complex problems and run on instinct instead. On the one hand, this conserves energy and we live to fight another day. On the other hand, we’re now running around the office in “Mastadon-fighting mode.” Prioritizing becomes a nightmare.

Here’s What to Do About It: Make a plan for how to divide your day first thing in the morning, before you get tired or lose the ability to think critically about alternatives.

3. We are terrible at envisioning things we’ve never seen.

Try imagining a color that doesn’t exist. Tough, huh? This task is made even tougher by the fact that the “mind’s eye” is a particularly feeble organ in humans. This is why it is so much easier to spend time thinking about problems (things we’ve seen) then solutions (things we haven’t seen.) The upshot for our schedule? We’re really terrible at estimating which tasks will be more difficult than others, or how we’ll feel about doing a task at a later time.

Here’s What to Do About It: After you’ve identified the two or three tasks that must get done, break them down into smaller chunks that are easier to estimate. In other words, don’t assume that writing a  report will be 2 hours. Write down the high-level tasks that are associated with that report, estimate time for each of them, and then add them up to get to a final estimate. This will help you more accurately estimate what can (or can’t) be accomplished in a single day.

4. Our brain is like a spaghetti strainer…it can’t hold much at one time.

Scientists used to think that we could hold five to seven items in our head at once. Now they think that number is closer to four. The number is even smaller when you’re working with unfamiliar words or concepts (like during the first 90 days of a new job.) Unfortunately, any time you have to drag something from short-term or long-term memory into working memory, your glucose needs shoot up.

Here’s What to Do About It: A lot of people make their “to-do list” and then try to keep it in their head throughout the day. A better strategy is to use a visual technique (like a mind map or big boxes) to draw your high-level priorities. Then, keep it somewhere visible so that you can reference it whenever you need to. This will prevent you from needing to recall this information throughout the day–which, of course, involves draining your brain of glucose.

5. Your brain can’t do two things at once.

…and anyone who tells you otherwise is lying. Our brain is just not physically capable of doing two cognitive tasks at once. It is capable of switching very fast from one task to another—however, doing so is very draining and usually leads to poor judgment calls. Unfortunately, HR departments everywhere are still putting this as a “must-have skill” on job descriptions. As a result, people are switching activities every three minutes and working an average of 11 minutes on a project before dealing with a distraction…and everyone thinks this is normal.

Here’s What to Do About It: Explore a time management method like the Pomodoro Technique, which helps you single-focus on important tasks while still staying accessible to your team. Also, wean yourself off obsessive email checking–try going an hour or two with email notifications disabled. Every time you check an email, your working memory is derailed and your decision-making center of the brain is taxed.

What experiences have you had with mental Frenemies?