5 Business Buzzwords to Leave Behind in 2016 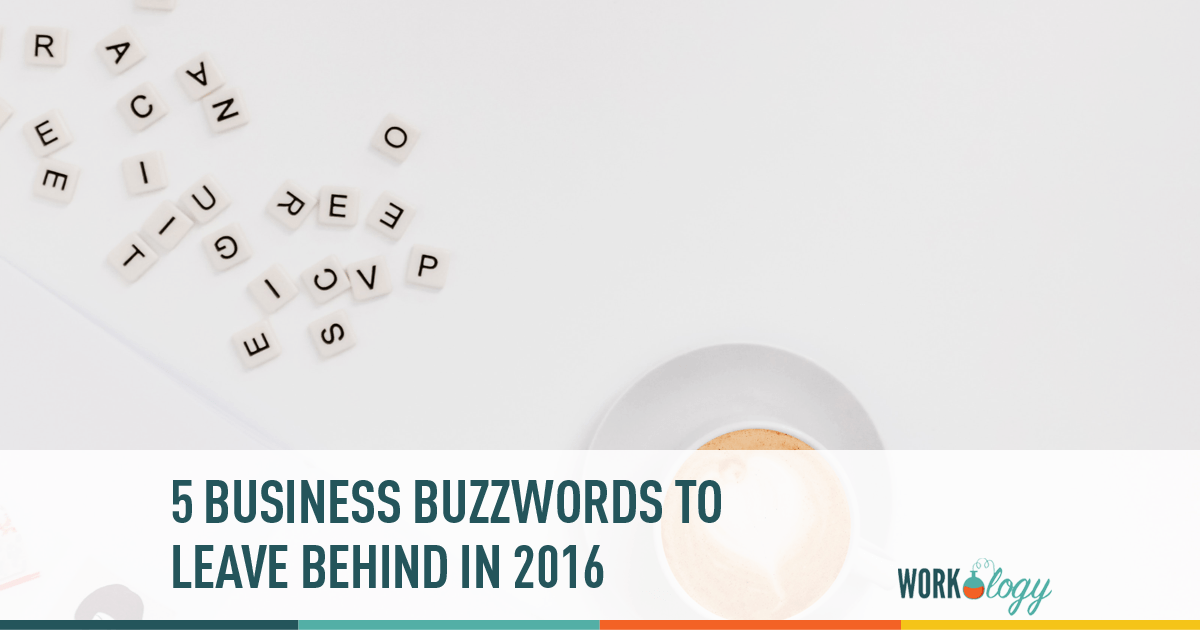 I am a great hater of buzzwords. Especially business buzzwords, which are so often ugly, more technical sounding than technical in fact. When impactful came into fashion I could not stop talking about its awful impact. It’s inelegant, unnecessary, dull. But business buzzwords become buzzwords for a reason: they reflect a bit of the zeitgeist and a bit of how business sees itself, and they draw a nice line between those in the know and those out of it. Hey, I understand the true meaning of synergy. Do you?

In 2015 we talked a lot about transformation – demographic, social, economic – and our buzzwords reflected that. It’s not imagined; things are changing in America and anxiety about that is natural. Outside of business, in pop culture and politics, is the same interest in change. We are in the midst of a huge demographic shift, with millennials and even younger workers overtaking baby boomers in the workplace and more broadly, in adult life. Millennial voters, millennial consumers, millennial workers – what will they do to America? This anxiety is a huge part of the current cultural climate. But what will be different and what will stay the same? As a millennial, I think the answer is probably not as interesting as we might like. Some things will change, but not as much we might hope for, and not as much as we might fear. Are we on the cusp of a total gig economy absent permanent employees? Please. Will this or that app permanently transform communication as we know it? Come on, now.

In honour of our first week back in the office after the holidays, I thought I’d offer five tired terms we could stand to leave in 2015. Here are my unfavorite five. It’s a new year – time to invent new frankenterms to express our inner anxieties!

The sharing economy is an invention of the tech industry and its adjuncts, businesses that are sort of tech companies and sort of something else. It describes a direct relationship between consumer and provider, with the intermediary business operating as a connector. Uber is a ridesharing facilitator, not a transportation service. AirBNB is a homesharing service, not a travel firm and hotelier. But where’s the sharing in the sharing economy? One doesn’t share a ride with an Uber driver; one purchases his services. One doesn’t share a home with an AirBNB host; one rents a room. What the term “sharing economy” describes is a feeling that companies in the sharing economy would like you to experience when thinking about them – that they are different from other more traditional firms, that your relationship with them is friendly, and that using their services is, in and of itself, transformational. You’re an Uber rider, a participant in the sharing economy, and that makes you different from taxi consumers. But you aren’t, Uber rider. You aren’t.

Let’s call it what it is: the sharing economy is a gloss laid over some new and fast-growing businesses in the economy that is. They’re transformational only in that they are operating on the edges of heavily regulated industries. Rather than a new model, they’re old model capitalism with some new tech. So let’s leave the “sharing economy” dream in 2015 and instead look a little closer at what deregulation and simplification might actually mean.

Mike Haberman has written a lot about the gig economy on B4J. What he says, broadly speaking, is that it’s not all it’s cracked up to be. The gig economy is supposed to be the partner of the sharing economy – workers respond to the parcelling off of full time work and the movement of employees to contractors by embracing freelancing full-time. In the gig economy all work is temporary and all contractors are ultimately their own boss. This is great for workers because they have more mobility, which should equate to more bargaining power and less incentive to settle – in a seller’s market. It’s bad for workers because they lack security, benefits and the ability to bargain in groups.

So why do we keep talking about the gig economy? Normalization. If the gig economy is normal, it is not unusual, and its working relationships are not simply how things are. The gig economy is normal, of course, as a facet of the much larger and more complex actual economy. There have always been casual and independent workers and there always will be. It’s a model that works great in some sectors and not so great in others. But in using the term gig economy to describe the broader movement of workers from employee to contractor we intend to say not that it’s a current economic trend, but that it’s the way things are going to be.

Growth hackers are usually marketers or PR people. Who else could call themselves a growth hacker and keep a straight face? Growth hackers are, essentially, marketers who specialize in social metrics and analysis. Did your MA in social media marketing? Halfway decent at your job, which is, like all marketers, to increase exposure and sales? And most importantly, do you work in the sharing economy, the commerical-creative side of the gig economy, or the just plain cool economy? Well, your true north is growth and you can call yourself a hacker of it.

Growth hacking is a funny way of referring to marketers who understand social technologies, data analysis, and consumer behaviour. It’s a joke that’s not really a joke – a “look at us laugh at ourselves” that is too serious to be truly funny. The “technique” of “hacking” “growth” is not really a technique, so much as it is competence, but the term serves to dress that up as something more. Hacking implies secrecy and the forceful finding and taking of those secrets. Growth hackers know something more about “growth” than do the rest of us, perhaps even the holiest of holies – perpetual growth and a straight line to success. Bundle growth hacker with the sharing and gig economies and you’ve got a weird little vision of the future mastered. A growth hacker knows which way the wind is blowing.

I polled my Twitter friends on buzzwords they’d like to see go out of style and disruption had a strong showing. It kind of had to, because the word is everywhere. If “growth” is a growth hacker’s true north, than “disruption” is the centre of this whole cluster of words and concepts. Disruption has become both a description of an economic phenomenon and an overriding goal – disruptive companies aren’t just finding exploiting market weaknesses, they’re transforming markets and that very transformation is a net good. That sounds incredibly exciting until you realize that disruption-as-goal has resulted in everyone from tech companies to burger chains calling themselves disruptive. And it sounds terribly compelling, disruption, until you realize that it just means the general and ordinary movement of power and resources within capitalism. One empire replacing another. We have invested in the newness of “disruption” as a way to assure ourselves that this time it will be different.

But Millennial, you protest, is just the name of a generation. It’s not a buzzword! As a Millennial, I must correct you – there is no such thing as a “Millennial.” Generations are an imaginary category of people. A generation is an organizational concept, not a consistently recognizable group of people. Older Millennials have a lot in common with younger members of Generation X, and young Millennials sometimes display attitudes more typically associated with Boomers and their parents. Observations that might have great importance for demographers, city planners, or public health professionals (“Millennials are buying fewer cars”) have less importance in the workplace. Demography is a science of observation and prediction, not a science of prescription: observations about generational trends can’t tell you how to manage your workplace.

But it sure does make us feel good to have people secure in tidy little boxes.

A Millennial, as the word is typically used, is disruptive almost by definition. Millennials are the younger generation displacing the older generation. When a young entrepreneur calls herself a Millennial she is claiming membership in a group from which many are automatically excluded. When a Boomer talks about managing Millennials in the workplace, she is looking to manage those little disruptors who could, potentially, upset the whole thing. But a Millennial is an idea of a person, not a person. Their – our – patterns of work and life are different than what came before – but only to a point, and only because of circumstance. It turns out that Millennials want the same sorts of things everyone else wants – financial security, work life balance, a stimulating career – and are struggling to achieve those things where economic circumstance makes that difficult.

What We Talk About When We Talk with Buzzwords

Don’t lean too much on buzzwords. They’re a crutch that isn’t built to hold your weight. They stay in use for only so long, dating your perhaps otherwise brilliant ideas. They also shape your ideas in ways you might not expect. They offer in group currency and a sense of the contemporary, but in doing so they plane off rough edges and turn something dynamic into something fixed: a phenomenon fully described. Which is a long way to say that they make you boring, hiding conventionality in novelty.

Circle back, my friends. It’s time to leverage the fine language centre of your brain and hack your vocabulary. I have no more bandwidth for buzzwords.