4 Reasons You Don’t Want to Hire a Rockstar 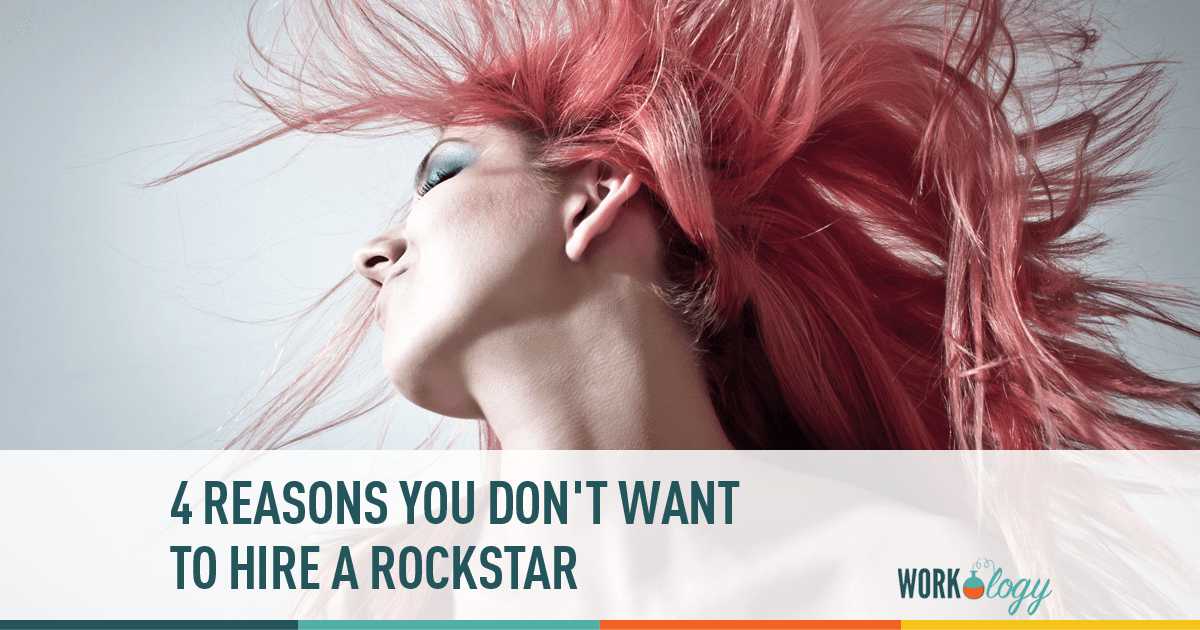 Your startup just secured a new wave of funding. Congratulations! You’ve outlined your plans for expansion, your cool new office and now you just need to bring on some new staff. I know what you’re thinking. You want a Rockstar. A superstar employee who has talent, charisma and loads of energy. Someone who will take your organization to the next level.

But you know what? A rockstar is the last person you should hire. Here’s why:

Divas Don’t Play Well With Others

You want a superstar to round out your team, right? Wrong! Superstars — rockstars — don’t play nice with others because they’re used to being the most important person in the room. Not only are they used to the attention of stardom, they’ve also grown accustomed to being, well, coddled. Swag bags, tour riders and samples — that rockstar you think you want to add to your team is used to having a free lunch every day of the week. Ok, fine. You just got that new wave of funding and you’re flush with cash. Perks you can handle. Free food is no problem. But for your rockstar only the best will do, and only the best in comparison to everyone else in the room. You can’t just give him a free lunch, it’s got to be a better lunch than every other member of the team. If you don’t feed that ego, your sweet break room is going to see some flipped tables, broken pool cues and appliances inconveniently embedded in the walls.

A rockstar doesn’t want to be a good team player. He wants to lead it and have his name on the door. That might sound great now, but remember, to him you’re just a backup singer.

Rock stars are used to three working modes: touring, recording and desperate unemployment. What they aren’t used to is showing up five days a week for a 9 to 5 gig. Let’s say you convince a rockstar to join your organization and commit to regular hours. Maybe you throw in two days of flex time a week, so long as they get their time sheets in on time. Sounds great, right? You’ve got all the energy and creativity of a musical superstar working on your software!

But wait. Rockstars are notorious for starting concerts late, getting thrown out of hotels and venues for bad behaviour, and (dammit Frank Ocean) turning in their albums months, years and even decades late. So they get you a great piece of software in the end — can you afford to wait five years for it?

They’ll Be High — All the Time

Ok, I’m going to be totally honest with you for a second. Drugs. Lots and lots of drugs. They’re a core part of the rockstar lifestyle and one that’s not easy to give up. Even if your rockstar has managed to avoid becoming an addict, he’s still used to being able to kick back after a long day — and sometimes even in the middle of the day — with some weed or cocaine. He’s also used to having to beat drug tests when necessary, either by paying off a key official or through even less savoury means. You’ve got a drug policy? Your rockstar does not care. As far as he’s concerned, getting high and going to work is normal; it’s what fuels his studio binges, his energy for endless tours and what chills him out when he finally decides to sleep. And he’s more than happy to share with his new friends: your team.

I get it, you want someone who will push the boundaries of what you think is possible for your product. Someone brimming with creativity and drive. You think you want a rockstar. But when your employees max out their sick leave thanks to hangovers, your nice new office gets trashed and your product becomes a jumbled mess of missed deadlines, code to nowhere and mystically-inspired user design… well, you’ll get it then.

Face it: the music business has moved on. It’s not a rock world anymore — so why are you trying to hire the star model of yesteryear? The very fact that you’re looking for a rockstar means that you too are behind the times. Maybe what you’re looking for is a K Pop girl group in your HR department, or a socially conscious Broadway musical cast on your sales floor. But a rockstar? That’s the last thing you or your organization needs.