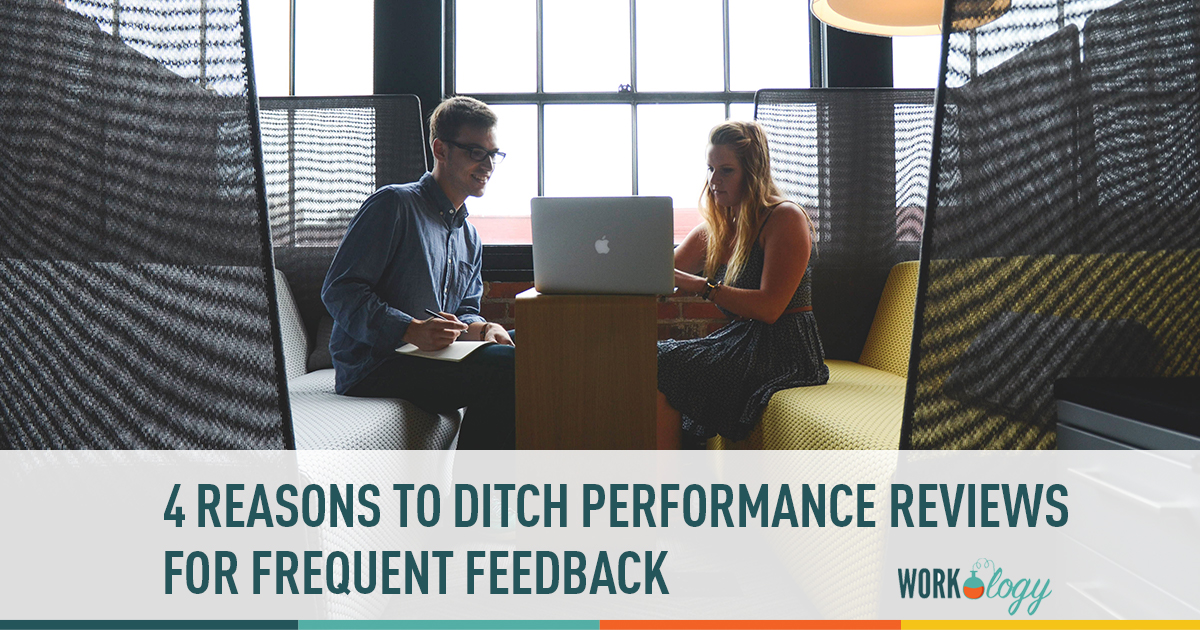 2016 might be remembered as the year we heard the death rattle of the traditional annual performance review. As those of us in the HR space know, there’s been a revolution brewing for a while, with companies like Deloitte, Microsoft, Adobe, and Accenture doing away with their review systems, well before the end of last year in some cases.

Accenture CEO Pierre Nanterme told the Washington Post in 2015 that “we’re done with the famous annual performance review, where once a year I’m going to share with you what I think about you, that doesn’t make any sense.”

In many companies there’s been a huge void left by banishing the annual review to the ends of the earth. After celebrating for a few months, employees are left thinking, “…but wait, now I have no idea how I’m performing.” High performers no longer get positive reinforcement and low performers do not know where they stand. This is particularly a problem with feedback craving millennials, such as myself!

What Fills the Chasm Left in Place of the Annual Review?

In June of 2016, General Electric announced a major shift in its review process. Like so many others, GE ended the rigid annual review and turned to a mobile app to collect feedback. One difference really stood out in GE’s approach, however: the company traded the annual employee-manager review session for a series of frequent check-in meetings to fill the chasm.

So why may turning to frequent, lightly documented performance check-ins be the answer to a better review process? Because they defeat some of the biggest problems associated with annual reviews while filling the void left, with meaningful growth-minded conversations:

Under a frequent check-in system, managers judge an employee’s performance based on something they did (or didn’t do) within a few weeks or months of the review rather than looking back at a whole year of activity. Frequent check-ins that include a light documentation element help focus performance assessment.

We store evidence about performance in a variety of different places, so it’s a challenge keeping track of all that evidence and using it effectively during review time — Deloitte noted that it was spending 2 million man hours on performance reviews each year, and you can bet a lot of that was spent on gathering paperwork. During check-ins, managers and employees can make quick notes on performance objectives which can be used when compensation decisions need to happen.

In the traditional review framework, projects and tasks can get swept under the rug or shrugged off – managers don’t have the ability to set expectations in real-time.

No Coaching or Real-Time Feedback

This is the biggest one. Under the old system, managers and employees don’t work on performance in real-time. If there are ongoing performance issues, frequent check-ins could be used to work on issues as they occur. As a 2015 HBR article noted regular one-on-ones may even increase productivity in general.

For some organizations, a weekly one-on-one with a performance component might sound like too much, but if employees view the weekly one-on-ones as an investment in coaching — like looking at a golf scorecard as you play rather than waiting until the end of the round to fill it out — they may just decide to join the revolution.

For HR practitioners, leading the frontier on changes like this may seem daunting — but at the end of the day, the more transparency and coaching and the less bias within an organization, the better and more healthy the organization will be!

This post originally appeared on the SHRM blog here. Its author, Prem Kumar, has held several roles in various spaces of the HR software industry, and loves building products that people love. Prem currently works as Lead Product Manager at TINYpulse. In his spare time he loves to stay active, cheer on Seattle sports teams, and support his favorite charities.