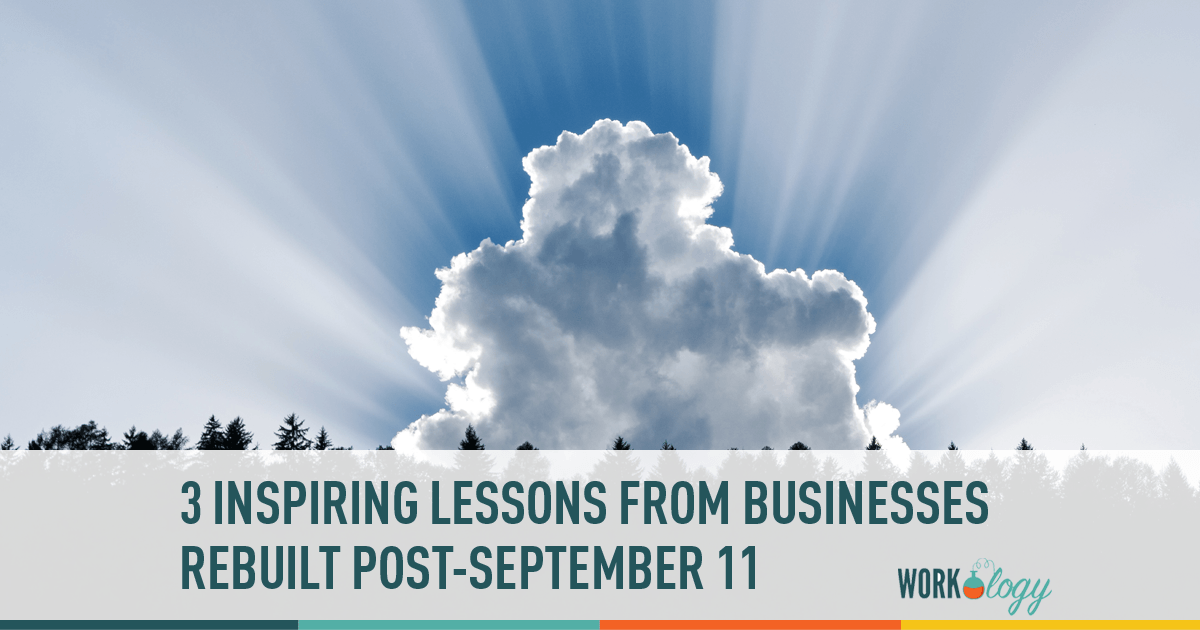 It’s been more than ten years since the tragedy of 9/11 changed the world. Among the many stories of hope and perseverance to come out of that day are the stories of the businesses affected in the wake of the attacks. An estimated 14,000 businesses, both small and large, were impacted when the towers went down. While not all of these stories had a happy ending, there is plenty we can learn from the grit and determination of these businesses to survive.

Here are just a few hiring lessons we can take from the indomitable spirit of leaders and entrepreneurs who refused to roll over in the face of tough circumstances post September 11.

Cantor Fitzgerald: No Matter the Odds, Never Give Up

Few companies were affected by the events of 9/11 as dramatically as bond firm Cantor Fitzgerald. Located on the 105 floor of the north tower of the World Trade Center, the company lost 658 of it’s 960 employees in the attack. With a full one third of it’s workforce gone in the blink of an eye, most thought Cantor Fitzgerald would close it’s doors. But surviving CEO Howard W. Lutnick, who lost a brother in the attacks, refused to give up. Today Cantor Fitzgerald is going strong, and still rebuilding after the attacks.

Cantor Fitzgerald had to hire new employees and replace skilled executives. The company needed to reassess, reorganize, and work with what they had. When hiring for important positions, you need to be mindful of the company’s past as well as it’s future. Make sure candidates can fit into the company and have the necessary qualifications. Most important, however, make sure the candidates believe in your company’s mission and are ready to bring their all to helping the organization achieve its goals.

After 9/11, lower Manhattan was a ghost town. It was difficult to get into this section of New York; cars were not even allowed to drive the streets. Many businesses moved from their lower Manhattan locations, afraid the lack of traffic would ruin their profit margins. But Harry Poulakakos, owner of Harry’s Cafe & Steak, disagreed. He knew his niche market existed in lower Manhattan and his customers would return. So Harry stayed and now owns several restaurants throughout the city, while still calling lower Manhattan home.

When hiring, it’s also important to understand your niche market. What exactly are you looking for in your position and what specific types of candidates would make the best fit? Don’t hire a generalist when what you really need is a specialist. This might mean you have to look outside the general job boards for candidates. Perhaps you have to turn to niche boards or tap into talent communities centered around specific skills. Don’t think of it as ignoring candidates outside the business niche, think of it as focusing on the right people for the job.

In the wake of 9/11, many companies needed to overhaul their practices. After surviving the attacks Greg Carafello saw his printing business steadily dwindle. Finally, Carafello sold the business and took a gamble on the New Jersey/New York franchise rights of ink and toner store Cartridge World. Now there are more than 30 stores in both states, which shows the benefits of embracing change.

In the hiring process, embracing change is especially important. Digital technology is changing every aspect of our daily lives, including how we source and hire great candidates. From social media recruiting to video interviewing, companies which embrace these new online avenues are seeing real value. The smartest candidates are the ones who are embracing these shifting paradigms, so don’t ignore a well done video resume or LinkedIn profile.

The bravery and perseverance of these businesses in the face of tragedy like September 11 can teach us a lot about our own hiring practices. Times are tough, but this doesn’t mean we should give up or get complacent. Hiring great people can turn a struggling business into a thriving one, which is why we should never give up in the face of adversity.