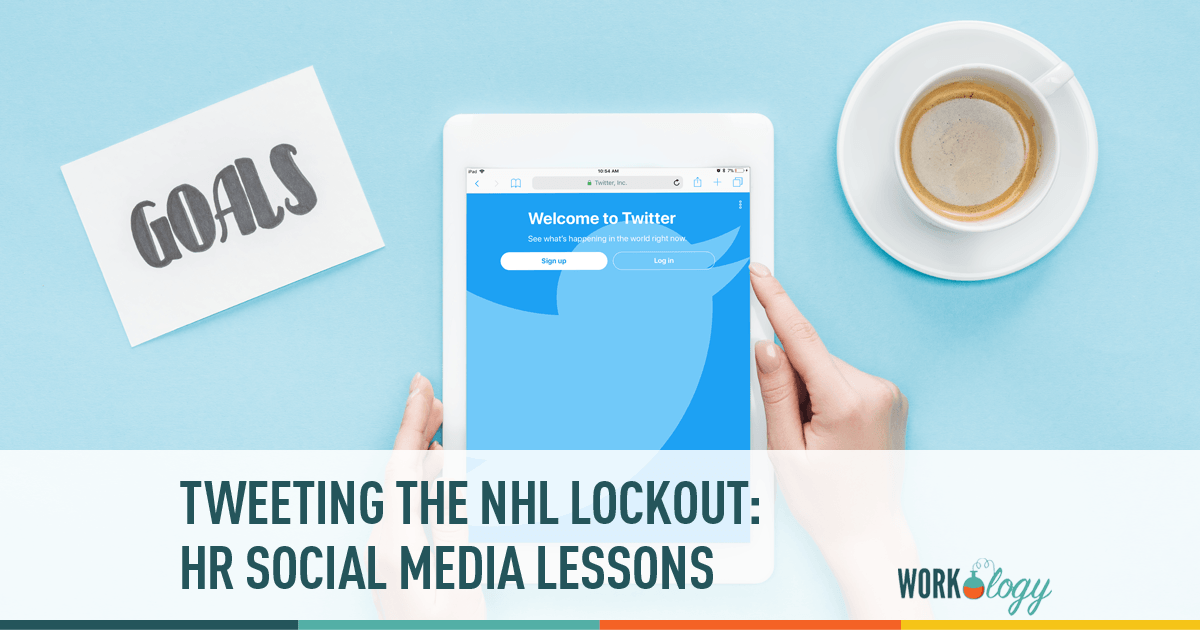 No pucks will be dropping anytime soon for the National Hockey League. The NHL went into lockout on Sunday, Sept. 16, 2012, following failing negotiations between the players and the owners. As with most things in business, the discussions centered around profits. The NHL lockout follows in the footsteps of several other high-profile lockouts in the last several years, including the NBA lockout, which greatly shortened last season. What’s different about these newest lockouts? Two words you could easily fit in 140 characters: social media.

Hockey players, organizations, and fans have taken to the social airwaves to vent their grievances and tell their side of the story. While Facebook, YouTube, and official web pages are all in on the action, one of the loudest sources of social media chatter is happening on Twitter. Players are tweeting about the lockout and connecting with fans from all over the globe.

There are plenty of lessons we can learn about workplace communication and the role of social media from the current NHL lockout. Your company doesn’t have to be in crisis mode like the NHL to realize the important role social media is playing in our everyday lives.

One of the most important aspects of social media is the way it frees information. Now a tweet can spurn a story that goes viral and ends up on the evening news. This democratization of knowledge has played a large part so far in the NHL lockout situation. In fact, some players have been tweeting information far before it was ever meant to see the light of day, including the owner’s proposals meant to be kept strictly to negotiations.

Your company should understand how social media can work as an echo chamber, allowing anyone and everyone to throw their voices into the mix. This is a powerful incentive to make sure your company is treating candidates fairly and positively during the hiring process. If you ask a discriminatory question, drop the ball on a candidate, or are otherwise unprofessional, suddenly this information could have a world wide audience and affect your employer brand.

In the past this anecdote would have stayed with the applicant and their close family and friends. Now, in the matter of seconds, it can be tweeted out to the world, giving other talented applicants a negative view of your company.

Use Your Employees as Brand Ambassadors

NHL players are strong brand ambassadors when it comes to swaying the opinions of hockey fans. Knowing this, the players have gotten in front of the story to make their case in a more persuasive manner than the owners. They’ve also utilized the power of online video, sharing videos decrying the lockout and citing their love for the game.

Strong employee and other brand ambassadors can sway opinion, and your company should be aware of this. Getting the movers and shakers in your career sector talking about your company is a great way to make it a more attractive place to work for interested candidates and help you build your employer brand.

It’s also important not to undervalue the importance of video. Whether you’re using it to promote your company, interview your candidates, or just show off company culture remember that a picture is worth a thousand words. Why do you think hockey players have been tweeting pictures of their sad unused hockey uniforms and gear?

The Main Lesson: Use Social Media To Tell Your Digital Story

With the proliferation of social media, it’s become harder to be in charge of your company’s narrative. If you want to attract the best candidates, it’s time to take a tweet from the 2012 NHL players’ social media playbook and make sure your story gets told.

What are some social media lessons we can take from the 2012 NHL lockout? Share in the comments!